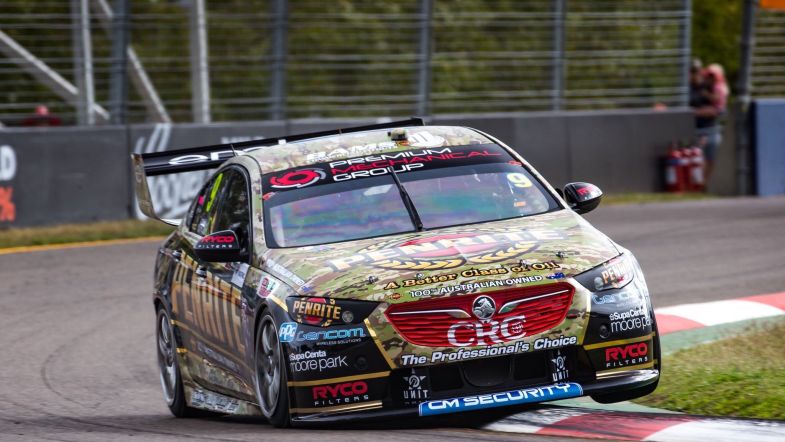 Erebus Motorsport driver David Reynolds has secured his first Supercars Championship pole position of the year ahead of today’s opening Townsville 400 race after beating out the field in a tight session around the street track.

The 2017 Bathurst 1000 champion made up most of his time in the first sector and retained the gap throughout the rest of the lap, coming home at the end to give himself the best possible chance of taking victory in the 200km race.

It was a big bounce back for Reynolds who tagged a wall in the day’s earlier practice session, coming back from that to complete the first all-Australian front row of the year.

Returning to the traditional format of one qualifying session as opposed to the three-session burst which has been predominant this year, the drivers had 20 minutes to put in their best times around the Reid Park circuit to set the grid.

The opening lap saw Scott McLaughlin go fastest out of the gates in the DJR Team Penske Ford Mustang, posting a time of 1:12.515 which put him nearly three tenths clear of Tim Slade from Brad Jones Racing.

McLaughlin was soon eclipsed by Chaz Mostert who put his Tickford Racing Mustang on provisional pole with a 1:12.468, less than a tenth ahead of his fellow Ford rival.

After the first runs, just a tenth of a second split the top five as Mostert led Triple Eight Race Engineering’s Jamie Whincup, McLaughlin, 23Red’s Davison and van Gisbergen early on before everyone rolled out for their second attempts at grabbing pole.

Again it was McLaughlin who put a gap on the field in his first lap, going fastest with a 1:12.302 and going just over a tenth and a half clear over Mostert. The Tickford driver responded, going just 0.022 slower than McLaughlin to solidify his second placing on the grid.

David Reynolds promoted himself up the order in the Erebus Motorsport entry, going to third by just 0.002 of a second over van Gisbergen who was still less than a tenth away from McLaughlin.

With just under three minutes remaining, the field rolled out of the pit lane for their final runs in qualifying, all looking to move up the grid to gain a better spot for the 200km race.

Mostert jumped up to provisional pole on his last lap with a 1:12.218 but was quickly eclipsed by Reynolds, the Commodore driver grabbing his first pole of the year after going around the circuit in 1:12.1060.

Reynolds enjoyed a healthy margin of just over a tenth to Mostert while McLaughlin missed out on a tenth pole for the year by just under two tenths from the Erebus machine. Van Gisbergen slotted his Red Bull car into fourth while Will Davison and Jamie Whincup filled out the third row.

Lee Holdsworth used the speed of his Tickford Racing Mustang from Friday to take seventh on the grid ahead of the Kelly Racing Nissan of Andre Heimgartner. The top ten was rounded out by Cam Waters and Mark Winterbottom in the Charlie Schwerkolt Racing entry.

Fabian Coulthard was left puzzled after the session when he could only manage 13th despite topping Practice 3, going slower than his earlier time in the day to start the race from the seventh row and almost half a second down on the pole man.

Racing will kick off at 3:10pm local time as the field fights it out for the win over 200km of street fighting.