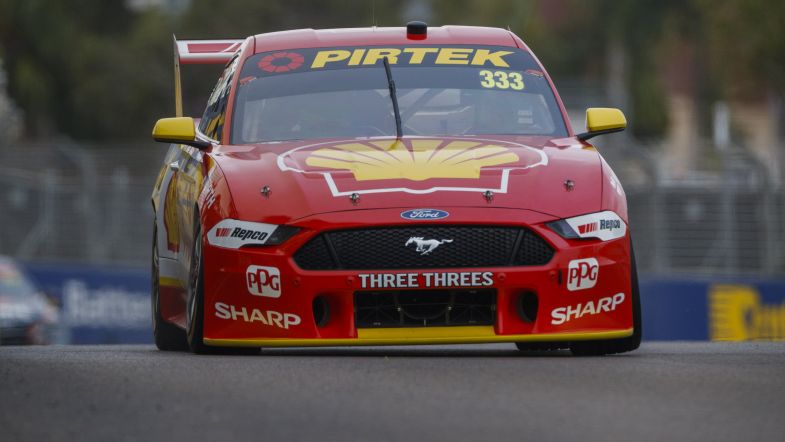 Scott McLaughlin on battle with Chaz Mostert: “I didn’t want to go crazy”

Supercars Championship Race 17 winner Scott McLaughlin has heralded the close battle he had with Chaz Mostert en route to taking the victory in this weekend’s opening Townsville 400 race.

As the DJR Team Penske and Tickford Racing Ford Mustangs battled for second place on the road in the early stages of the race, the pair fought hard and made contact though both kept going, McLaughlin ending up on top with his sixth straight win.

After climbing out of the #17 car, the defending champion said he enjoyed the battle but was initially nervous about race leader David Reynolds running away in the Erebus car.

“(There were) Some good battles; me and Chaz had a good battle it cost us a lot of time which I tried to make up through the race but thankfully we had really great car pace,” he said after the victory.

“I didn’t want to go crazy; it was a good battle with me and Chaz; he switched me back, I switched him back, it was pretty full on. Then we interlocked (wheels) and I was pretty nervous but overall pretty good.

“The guys at Shell V-Power Racing have given me an awesome car and across the run it kept coming and coming. That was a good one.”

Though he qualified on the second row, good pace over the 70 laps and strong tyre life brought McLaughlin into the race, eventually taking the race lead after the final round of pit stops ahead of Triple Eight’s Jamie Whincup.

“We had really great tyre life and that’s probably what changed the race; about 15 laps into the stint is when my car came good and we just kept going.

“I figured we had six or seven laps the better in tyre life (over Whincup) which around here is quite a lot. I just tried to bring up the tyres nicely and eventually went past him.

“We were aiming to be solid and this win was a surprise; we wanted to have a solid race but to have the pace we did was good.”

McLaughlin now leads the championship by 359 points over second placed Fabian Coulthard, making it a perfect 1-2 in the standings for DJR Team Penske who announced this week that both drivers will be retained next season.