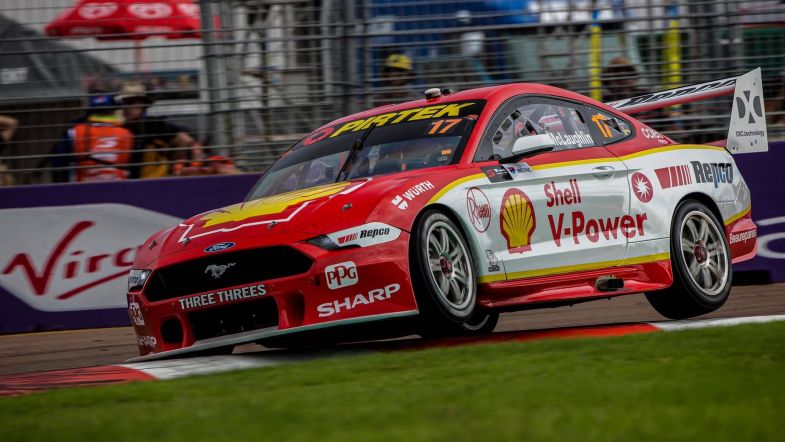 After starting from the second row of the grid, McLaughlin showed strong car pace across the 70 laps, pulling out a gap in the closing stages to help him take his 13th win for the season around the Reid Park circuit.

With no safety cars throughout the race, car pace and strategy were the only things separating the drivers up and down the field as McLaughlin prevailed, extending his championship margin out to over 350 points clear of his team-mate.

Pole sitter David Reynolds kept his advantage at the start in the Erebus Motorsport car but from the second row it was McLaughlin who got the best jump off the line, bumping with Chaz Mostert’s Ford Mustang from the first row as they went through the Turn 1 kink.

Reynolds led the pack through the opening tour as Mostert got the edge over McLaughlin behind him but the battle was heating up between the Triple Eight Race Engineering drivers in Shane van Gisbergen and Jamie Whincup after the former lost out at the hairpin, sparking a lap-long battle for fifth.

The pair were engaged in combat until the end of the first lap with van Gisbergen prevailing, leaving Whincup to fend off the Kelly Racing car of Andre Heimgartner and the Tickford Mustang of Cam Waters; the trio making contact into Turn 2 which nearly ended up with all three off the track.

After 17 laps McLaughlin started to mount an attack on Mostert, the pair bumping and grinding throughout the opening sector which saw Mostert retain second while van Gisbergen and Will Davison ranged up on them.

McLaughlin finally got past for second on lap 19 as Reynolds bolted down the road and Whincup, who pitted a few laps before, was making ground in fresh air. Mostert’s woes continued as van Gisbergen got past the ailing Tickford Racing car.

A short fill for Whincup in his opening stop brought him out on track far ahead of McLaughlin and Davison as Mostert dropped behind Coulthard’s Shell car. Reynolds came in from the lead on lap 23, taking on more fuel which saw him emerge behind Whincup but still ahead of McLaughlin.

On lap 24, van Gisbergen came in as the last of the front-runners to stop, taking on more fuel than anyone else to feed back onto the track well behind Coulthard and the pack in front.

Pseudo team-mates Mostert and Davison had some bump and grind on lap 25, making contact over the surface change at Turn 10 which nearly sent both cars off the circuit after Mostert drifted wide into the 23Red car across the bumps.

A tricky day for Tickford continued on the next lap when Waters locked out into Turn 2 after coming out of the pits, drilling the #100 Castrol car of Rick Kelly which spun the Nissan driver. Waters was handed a 15 second penalty for the incident to be served at his next stop.

On lap 30 McLaughlin started to pile on the pressure to the back of Reynolds’ entry, fighting for second on the road and the race lead thanks to their longer first stops compared to Whincup. The championship leader found his way past the pole sitter, allowing him to close the gap to Whincup ahead of the final stops.

Whincup came in for his last stop on lap 39 from the race lead, taking the required amount of fuel to the end, returning to the circuit in traffic and on cold tyres which aided McLaughlin up front.

Mostert and Davison pitted in on lap 43 with the former having the benefit of clear air while Davison fell in behind Fabian Coulthard. Reynolds was the next to react, losing a bunch of spots after a wheel nut issue held him up after the fuel had already gone in, coming back on track behind Coulthard.

McLaughlin relegated the race lead on lap 45 with his last stop, taking on fuel to the end and tyres, returning to the circuit only a few seconds behind Whincup but on fresher tyres.

With just over 20 laps remaining, McLaughlin got up to the rear bumper of Whincup and found a way past at the final turn, moving into second on the road which ended up behind the race lead after van Gisbergen took his last pit stop.

Despite a late challenge, Mostert couldn’t get past Whincup for second position as McLaughlin led the duo to head the podium. van Gisbergen just rounded up Coulthard for fourth at the end on fresh tyres though the fifth placing was a great improvement on Coulthard’s 13th place qualifying effort.

Reynolds and the Erebus crew were left to rue their last pit stop, only managing sixth after starting from pole. Davison, Nick Percat, Mark Winterbottom and Lee Holdsworth rounded up the first ten finishers.

Next up is the second qualifying session, starting at 13:35 local time tomorrow.