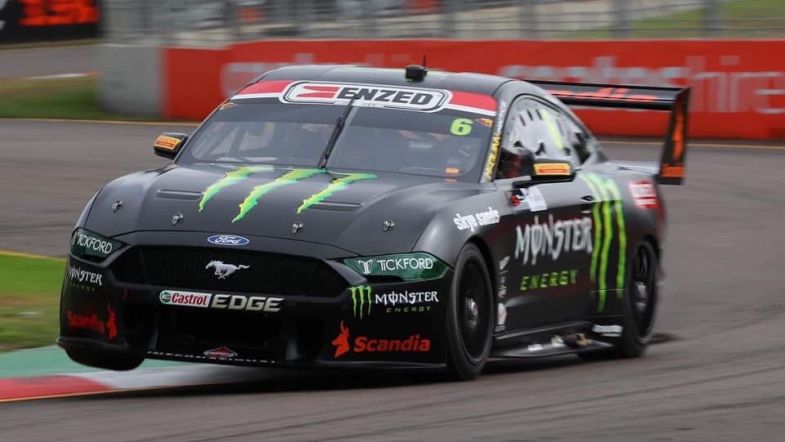 Tickford Racing’s Cameron Waters has bounced back after a horrid Race 17 to claim pole for Sunday’s closing Townsville 400 race.

The Ford driver improved from fifth in qualifying to put in the strongest lap over the top ten shootout, securing his first pole position of the year and first front row start since Albert Park back in March.

It wasn’t an easy task as Waters had to wait in the garage while four drivers took a crack at displacing him from the top of the order after his lap, taking another pole for the Mustang this year.

Qualifying
The opening laps in the opening 20-minute qualifying session for the whole field saw Lee Holdsworth on top in his Tickford Racing Mustang, carrying over the great form he showed on Friday to end up quickest in second practice.

On his second set of flying laps it was Scott McLaughlin who went quickest with a 1:12.119, the DJR Team Penske man putting a gap of three tenths on the field with over 10 minutes still remaining.

With three minutes remaining a majority of the field came out of the pits for their final runs, all looking to make it in to the top ten for the shootout and have another crack at qualifying higher.

Todd Hazelwood in the Matt Stone Racing entry promoted himself well up the order into third, being the quickest of the Triple Eight built cars and the second fastest Holden with only Saturday pole stitter David Reynolds ahead of him in the Erebus car.

Shane van Gisbergen made it into the top ten, only a few hundredths down on Hazelwood despite being in a factory Triple Eight car. Cam Waters, Anton de Pasquale, James Courtney, Fabian Coulthard, Lee Holdsworth and Tim Slade all made it through to the afternoon’s shootout, wanting to displace McLaughlin from provisional pole.

Ten time winner around the streets of Townsville Jamie Whincup could only manage 12th in his Triple Eight Commodore, matching his time of Saturday while the field moved forwards. Chaz Mostert in the #55 Tickford car also struggled, qualifying 16th for the race after a podium yesterday.

Shootout
Slade was the first on the road, only managing a 1:13.120 on a used tyre, quickly eclipsed by Holdsworth who was running two fresh Dunlops on the rear. Coulthard moved passed both of them, taking provisional pole and holding it after Courtney failed to stitch together a good lap due to a scrappy opening sector.

de Pasquale was the fastest car at the time in the first sector but lost time over the lap, slotting behind Coulthard for the time being who stayed on top until Waters put in a strong middle sector on his lap, going to the top with a 1:12.486.

Next up van Gisbergen hit the track and couldn’t better Waters’ time, slotting behind the Tickford and DJR Team Penske Mustangs. Hazelwood put in a strong showing on his flying lap, going better than van Gisbergen in the other Triple Eight Commodore in the shootout but still almost three tenths away from Waters.

To cap off the session, Reynolds and McLaughlin had cracks at Waters; Reynolds went quickest by a big margin in the first sector but fell away later in the lap, dropping behind the Tickford car. Finally McLaughlin went for pole, consistently being on the borderline all lap but he couldn’t displace Waters, ending up just 0.015 down on the other Mustang.

With his first pole of the year, Waters will line up alongside McLaughlin on the grid with Reynolds and Hazelwood behind them. Row three will have Coulthard starting his 400th race in fifth ahead of fellow Kiwi van Gisbergen, wanting to also keep de Pasquale, Holdsworth, Slade and Courtney behind them at the start.