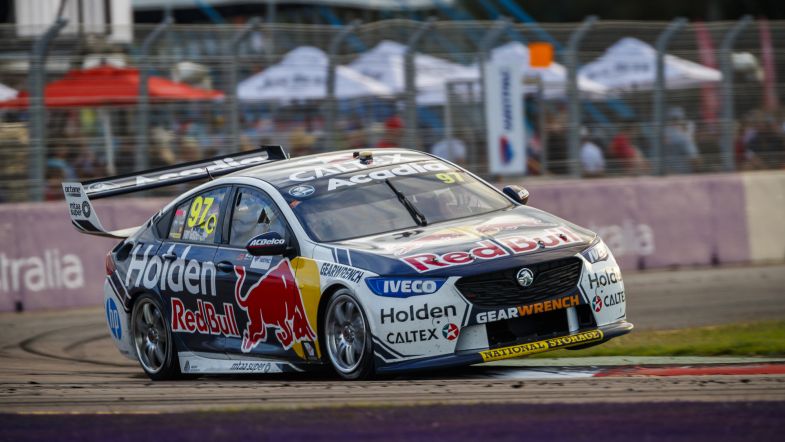 Triple Eight Race Engineering’s day of two stories was highlighted with a victory on the streets of Townsville as Shane van Gisbergen took the win in a wet race at the Reid Park circuit.

Finishing under safety car, van Gisbergen came home in first for only his second win of the year, mastering the wet conditions and being put on a good strategy to end up on top.

While van Gisbergen took home 150 points in a hard 200km race, it was the DNF for his team-mate Jamie Whincup which sparked the race into action early on in the piece.

A brief shower came over the circuit just before the race start with pouring rain coming down on the warm up lap after the whole grid had gone out on slicks, making for a tricky opening lap.

Pole-sitter Cam Waters got the early jump of the line in the Tickford Racing car and led through the kink as Scott McLaughlin and David Reynolds made contact, puncturing the right rear of the DJR Team Penske car and damaging the left front on the Erebus Commodore.

While Waters bolted off into the distance, McLaughlin came in to take off the punctured tyre with the team initially fitting wets before changing their minds and putting slicks on the championship leader’s car.

In the opening laps both the wet weather experts in Shane van Gisbergen and Chaz Mostert made big gains in their cars. van Gisbergen got up to third at the end of the third lap in his Triple Eight car while Mostert tried to get his Tickford machine past the Matt Stone Racing entry of Todd Hazelwood in fourth.

James Courtney dropped like a stone in the first few laps after qualifying in tenth thanks to his Walkinshaw Andretti United car being fitted with the wet tyres while everyone else stuck with slicks, being able to capitalise on the dry line forming.

As the racing line started to dry out, Coulthard in his 400th race start gained on Waters at the front as Mostert was under pressure from the Triple Eight duo of van Gisbergen and Whincup for third place.

Whincup was pulled out of the battle on lap 17 for his first pit stop, taking on fresh rubber and fuel to try and replicate his performance of race 17 in clear air while his team-mate continued to fight Mostert.

Coulthard caught up to Waters by lap 18, applying pressure to his fellow Ford driver after gaining at over half a second a lap. Both stopped at the start of lap 19 and it was Coulthard who got the jump on Waters out of the lane.

Just as the leaders started to cycle through the pits the rain threatened to make another appearance. The race was turned on its head when Whincup spun on his own, putting the #88 into the fence and bringing out the safety car for the first time over the weekend.

McLaughlin came in for fuel, taking on 100 litres in total but dropping behind Coulthard and going a lap down Mostert and van Gisbergen all took on slicks and fuel in the safety car period.

Racing resumed with Coulthard heading the field on lap 26, being tailed by McLaughlin who was a lap down and then Waters, van Gisbergen, Mostert and Nick Percat’s Brad Jones Racing car in position five.

On the opening lap van Gisbergen lost a handful of spots after Mostert forced him wide with Percat and Holdsworth following him through. Mostert then found himself under attack from Percat, holding off the BJR man as Holdsworth had a crack at fifth place.

As all the battles were going on at the front, further back Andre Heimgartner’s Kelly Racing Nissan was speared at Turn 2 by Mark Winterbottom in the Team 18 car after he tried to make a pass. Will Davison in the 23Red car was an innocent bystander in the incident, taking damage after tagging the spun Heimgartner.

Waters retook the lead from Coulthard on lap 30, showing genuine pace in the slippery conditions as van Gisbergen came in for wet tyres as the rain started to come down again, forcing the Waters and Coulthard into the lane to do the same.
Mostert pitted on the next lap as Anton de Pasquale took the lead after the Erebus crew pulled him in for wet tyres under the safety car, making a massive gain as everyone else fell by the wayside.

As everyone cycled through for the wet Dunlop tyres, de Pasquale enjoyed a healthy lead over Waters, van Gisbergen, Coulthard, Mostert and Garry Jacobson’s Kelly Racing Nissan. Only de Pasquale and Mostert hadn’t reached their minimum fuel drop, making it seem like Waters was in the box seat until he went off at the Turn 2 escape road, losing two spots.

The battle for second on the road heated up with Coulthard sticking to the rear bumper of van Gisbergen as Mostert bought into the fight as one of the fastest cars on track. The Tickford driver finally got through to third on lap 48 but with a cloud hanging over his head that he’d need to take on more fuel to meet the 110 litre minimum drop requirement.

Mostert continued his charge by getting past van Gisbergen on lap 50 though some hip and shoulder between the pair resulted in van Gisbergen retaking the spot on the road, having to defend it further before finally relegating the spot.

A multi-lap battle between Waters and Percat ended in tears when the BJR driver tagged the rear of the Tickford car, forcing them both off onto the escape road at Turn 4 and putting a podium finish for Waters at risk while Percat received a 15 second penalty.

Mostert came in for the last of his fuel drop on lap 61, rejoining the track just behind team-mate Waters in fifth. Just as de Pasquale was about to pit the safety car was deployed thanks to a crash from Jacobson with the race close to going time certain.

An incident in the pits with Percat’s fuel rig saw the BJR car catch fire in the lane. When he came for his stop, the vent on the hose jammed open and once the car took off, the hot exhaust ignited it, causing the car to burn as well as parts of his garage.

With the time certain number being reached, van Gisbergen took the chequered flag for his second win of the year as Coulthard finished second in his 400th race and Waters salvaged a third place.

After leading a majority of the race de Pasquale came home third while Mostert finished fifth after starting outside of the top ten. Rick Kelly just missed out on a top five while James Golding and Michael Caruso were the Garry Rogers Motorsport bread in a Lee Holdsworth meat sandwich for seventh, eighth and ninth.

With a penalty being applied to Tim Slade late in the race, the BJR driver was hit with a time penalty, promoting Simona De Silvestro to tenth in the Kelly Racing Nissan. Despite the early contact and being a lap down for a while, championship leader Scott McLaughlin fought hard in the latter stages to finish 11th.

The next Supercars Championship race takes place on July 27-28th at Queensland Raceway.