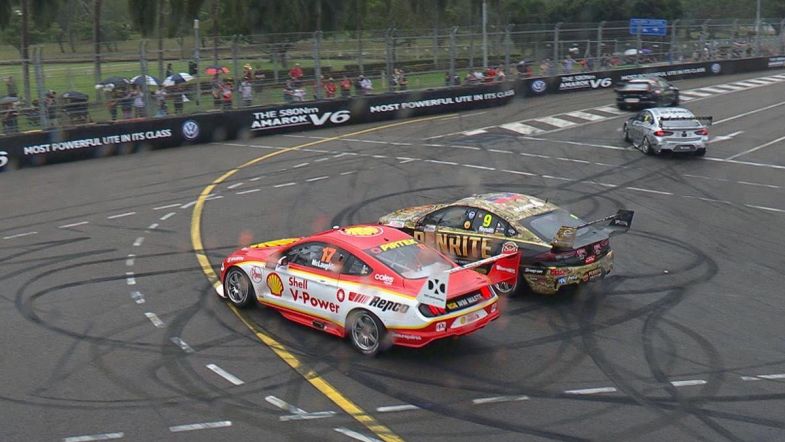 Title contenders Scott McLaughlin and David Reynolds have expressed a difference of opinion after an opening lap clash in Race 18 saw the DJR Team Penske and Erebus Motorsport cars drop down the order.

Fighting in slippery conditions around the Turn 1 kink, Reynolds tried to slide up the inside of McLaughlin but found the door shut, making contact with the championship leader’s car and causing a puncture to the Mustang while broken suspension put the Erebus Commodore into its garage for a few laps.

Being ahead of the road at the time, points leader and defending champion McLaughlin says the move wasn’t on as they were fighting for clear air.

“Everyone’s battling for visibility and traction; it’s risk management on days like today especially when you’re up the front and for a championship position like he (Reynolds) is.

“Dave was just a desperado. He can say what he wants, I went and saw him and he said I turned in but if I did it was by a millimetre.

“You can’t win all of them, we had a great car today and rebounded well. There’s people worse off than us including him. The team got a podium with Fabs (Coulthard) so moving forward it was good.”

On the counter, Reynolds says it was McLaughlin who moved in on him when he was trying to make a legitimate pass for position at the busy start.

“Not the best day I’ve had in a long time”, Reynolds said.

“I got off the start line and into Turn 1, Scott seemed to brake early and I thought it was an opportunity to pass him. It looked like he moved right a little bit and we made contact which ripped the front out of my car.

“He came up (after the race) and wanted to know what I did, I told him to look at the footage before he came back. We’re just here racing, if I don’t go for the spot we’re not racing, we’re following people around.”

While McLaughlin maintains his championship lead of 292 points over his team-mate Coulthard, Reynolds has dropped from third going into the round to fifth, 534 points away from McLaughlin but only 35 separate himself, Chaz Mostert in fourth and Shane van Gisbergen in third.