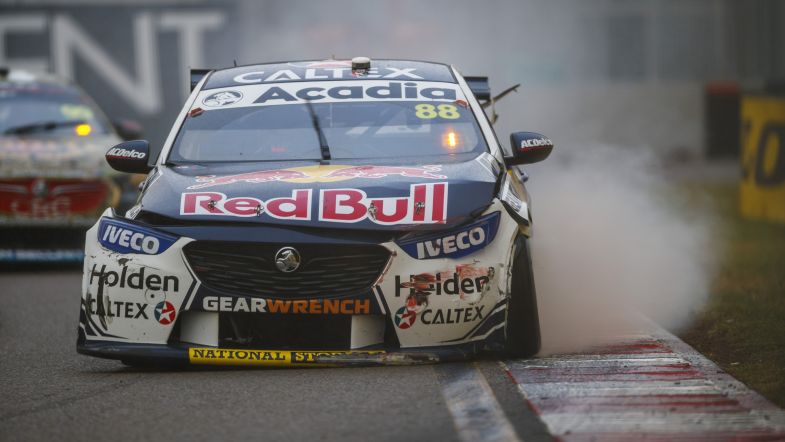 Jamie Whincup says he was pushing too hard when he crashed out of Sunday’s Townsville 400 race all on his own in wet conditions.

The seven-time series champion and ten-time winner at the Reid Park circuit hit the wall after dropping a cold slick tyre onto the wet kerb in Race 18, parking up his Triple Eight car on the way back to the pits which brought out the race’s first safety car.

Trying to make the most of the clear air around him after his pit stop, Whincup says once he was out wide it was game over for the #88.

“We put some really good tyres on there after the stop and I was pushing hard to try and make up some ground,” he said.

“I just got a little too much kerb, had the big wobble and got out on that painted stuff. In that area you’re a bit of a statistic.”

“It’s been a good weekend really but this rain wasn’t on the radar. It was going to drizzle maybe a little in the middle of the day but certainly not like that; it just popped on top of us and caught everyone by surprise.”

Despite the hefty crash, the damage to the car is provisionally minimal and the win for Shane van Gisbergen on the other side of the garage will boost the team ahead of their home race at Ipswich says Whincup.

“(The damage) is very low. Why I stopped is it had no oil pressure so I had to switch it off but the damage is good so we’ll turn it around pretty quickly.

“I’m rapt for SVG though, he always goes great in the wet. It’s needed because we were going to go home and fix a car but to go home with a win as well lifts the team and makes the next few weeks a bit easier.”

Triple Eight has a near month-long break to repair the #88 Holden Commodore ahead of the next round at Queensland Raceway with the Ipswich SuperSprint running from July 24-26.