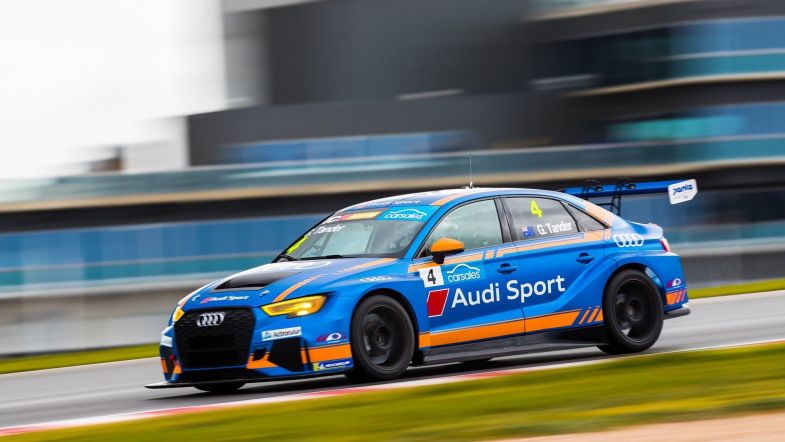 The 2007 Supercars champion started third and briefly held the lead approaching half-distance before running wide at Turn 12 and dropping to fourth.

He fought his way back through the field to head newcomer Jordan Cox – who later received a 10-second penalty for contact with James Moffat on the opening lap – over the line on the road, with points leader Will Brown taking second place officially from 16th on the grid.

Tander’s team-mate Aaron Cameron recovered from a poor start to claim the final step on the podium.

Moffatt led off the line despite a rain shower just before the start, but D’Alberto seized the lead under braking for the Turn 6 hairpin.

D’Alberto’s lead did not last long though and the Honda driver slid off at Turn 9 after catching a snap of oversteer mid-corner.

That allowed Moffatt back into the lead, but the Mégane was tipped into a spin on the exit of Turn 15 by Cox. Delayed by the contact, Cox then lost the lead to Tander at the end of a crazy opening lap.

Tander maintained his advantage following a brief safety car intervention from Cox and Cameron, but the latter dropped down the order after an ambitious attempt to wrestle second from Cox at Turn 1 failed to pay off.

Brown stayed out of trouble on the opening tour and took the restart in sixth, having qualified a dismal 16th. The HMO Customer Racing driver passed the Hondas of Alex Rullo and John Martin at the restart before moving to third following Cameron’s excursion.

Cox then grabbed the lead on lap seven after Tander also got a snap of oversteer at Turn 12, dropping to fourth behind Brown and Martin.

Under pressure from Martin, Brown dipped a wheel onto the grass exiting Turn 9 and slipped behind the Honda to third, with Martin clinging onto the back of Cox for the lead heading into the closing stages.

Martin picked up some damage on his front splitter and dropped out of the lead battle, while at the same time, Tander found a way past Brown for second.

This then became the lead after the Audi RS 3 LMS got better traction out of Turn 12 to seize the lead on the run down to Turn with four laps remaining.

Tander kept his lead from Cox, who slipped to seventh overall following his penalty, with Brown and Cameron taking the lower steps of the podium.

Martin was promoted to fourth ahead of the Hyundai i30 N TCR of Nathan Morcom and the second GRM Renault of Chris Pither.

Behind Cox came the recovering D’Alberto and Moffatt, while Rullo completed the top ten.