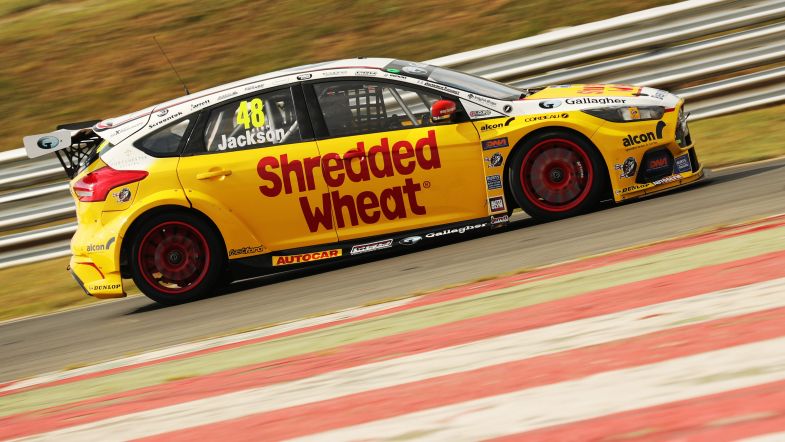 Ollie Jackson led the way on the second day of the two-day BTCC tyre test at Snetterton, although he was unable to prevent Motorbase team-mate Tom Chilton from topping the times overall.

Jackson, who recently celebrated his wedding to long-time partner Emma, got within a tenth of a second of Chilton’s Tuesday best during the morning session at the wheel of his Focus RS, setting a best time of 1:56.290s.

As was the case with Chilton yesterday, that was noticeably quicker than Jackson could then manage during the afternoon running, when the Alfa Romeo of Rob Austin headed the times with a late lap that knocked Jake Hill’s Audi off the top of the times.

“We’ve learnt a lot and written some things off too, but we seem to be in good shape for the rest of the season,” Jackson said. “My year so far hasn’t really included the results we’ve felt we’ve deserved. We’ve had some bad luck and made a few minor errors that have been unduly punished, so overall we just haven’t had the rub of the green.

“Of course topping the times in testing doesn’t win you any points, but it’s a good feeling and a great boost ahead of the event here in a few weeks’ time.”

Dan Cammish was once again right at the sharp end of the grid in his Team Dynamics-run Honda and was second quickest by virtue of his morning time ahead of the Mercedes of Adam Morgan.

The Ciceley Motorsport driver would however fail to set a time during the afternoon session.

Austin’s pace-setting time in the afternoon would be good enough for fourth on the combined times ahead of Sam Tordoff, who ended his running early for Cobra Sport AmD to prepare for his own wedding on Thursday.

Jake Hill was sixth best in the Trade Price Cars Racing Audi, with the top eight completed by Jack Goff’s Team HARD Volkswagen and the Toyota of Tom Ingram.

Elsewhere, the second day of the test saw Henry Neal sample the FK8 Honda and post the 27th best time, just ahead of Team HARD’s Clio pairing Max Coates and Ethan Hammerton who spent time at the wheel of the VW CC.

Aiden Moffat again propped up the times in the Laser Tools Racing Infiniti, with the team planning to introduce revised ducting ahead of the Snetterton race weekend to improve turbo performance.