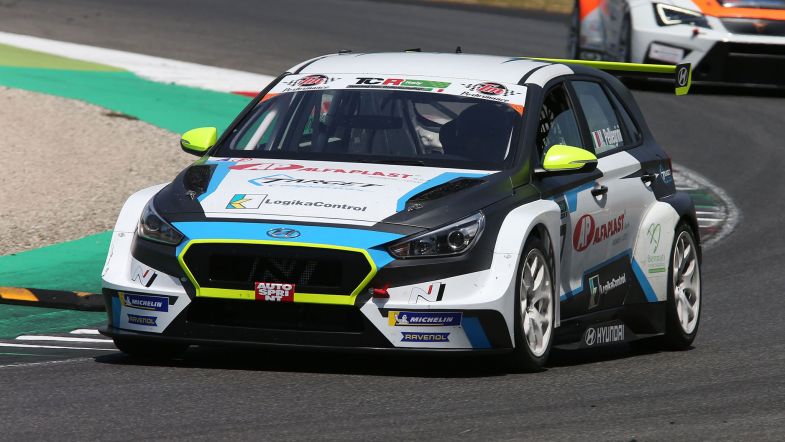 Target Competition’s Marco Pellegrini secured his second win of the TCR Italy season with a dominant drive in race one at Mugello.

Pellegrini was due to start second on the grid in his Hyundai i30 N TCR, but when polesitter Enrico Bettera developed a technical issue in his Audi RS 3 LMS and had to start from the pit lane, Pellegrini found himself effectively in pole position.

At the start, Pellegrini kept the lead ahead of Scuderia del Girasole’s Salvatore Tavano, Matteo Greco and Eric Scalvini in their Cupra TCRs, with BF Motorsport’s Jacopo Guidetti in his Audi RS 3 LMS in fifth position.

Damiano Reduzzi meanwhile parked his Hyundai i30 N TCR due to a technical problem on lap two whilst Bettera was recovering positions after starting from the pit lane – but cut the chicane to overtake Team Wimmer Werk’s Gunther Benninger, at the wheel of a Cupra TCR.

Both VRC Team’s Klim Gavrilov and BR Motorsport’s Matteo Bergonzini, headed to the pits with mechanical problems at the end of the third lap, although Gavrilov – who would have started from pole without his grid penalty – was able to return to the track.

The positions remained stable at the front, but soon Scalvini came under fire from MM Motorsport’s Davide Nardilli until the Honda driver had to slow down due to a puncture, retiring on the track.

Scalvini closed the gap to Altoé, attacking the Pro Team driver for fifth position, overtaking with just six minutes left in the race.

At the chequered flag, Pellegrini scored his second victory of the year, ahead of Tavano and Greco.

Guidetti was fourth, with Team Wimmer Werk’s Felix Wimmer taking fifth place from Scalvini in the closing stages of the race.

Bettera continued his recovery, overtaking Altoé for seventh place on the last lap, with the Pro Team driver locking the brakes, losing several positions and falling out of the points.

Race 2 at Mugello is scheduled for Sunday afternoon at 13:40 CEST.