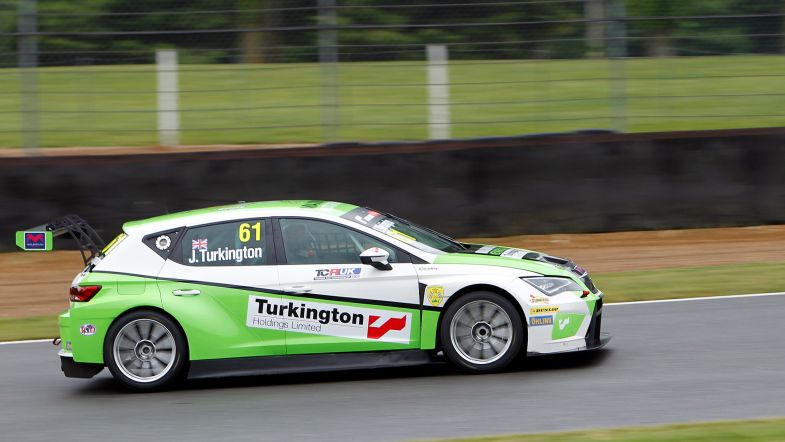 James Turkington will head into the final round of the TCR UK season with a 19 point advantage over Lewis Kent after taking victory in Race 2 at Brands Hatch.

Turkington got the jump on pole-sitter Henry Neal’s Honda Civic Type R when the lights went out, while Kent lost valuable ground by sliding onto the grass at Druids on the opening lap.

The Essex and Kent Hyundai i30 N TCR eventually finished third overall behind Neal but second in TCR UK.

Turkington’s margin at the end of the first lap over Neal stood at nine-tenths of a second, with Halstead maintaining his third place off the start.

Kent’s recovery began with an easy pass on the Vauxhall astra TCR of Darelle Wilson on the inside of Druids for sixth.

It continued two laps later with an assertive move on the HMS Racing Audi A4 of Alex Day at Paddock Hill Bend.

Successive fastest laps – aided by a reduced ballast in his Hyundai – enabled Kent to surge onto the back of Halstead, with the latter relinquishing third on the entry to Paddoock with 15 minutes remaining.

Kent closed in on second-placed Neal – who copped a five-second penalty for exceeding track limits – but the teenager needed to pass the Touring Car Trophy class Honda in order to catch Turkington.

Neal’s defence was resolute until the end and kept Kent at bay, despite a mistake at Paddock on the penultimate lap.

Kent therefore had to make do with second in the TCR class, leaving Turkington to take the flag by 2.422 seconds.

Further back, Stewart Lines in his Maximum Motorsport Cupra and the Audi of Day were embroiled in a frantic battle for fifth place, with Day proving the quicker of the two as the race entered its closing stages.

A mistake at Paddock from Lines allowed Day to slide his car up the inside into Druids with nine minutes left, before going on to pass Halstead for fourth at the end.

The final round of the season takes place at Donington Park on the weekend of the 19th October.