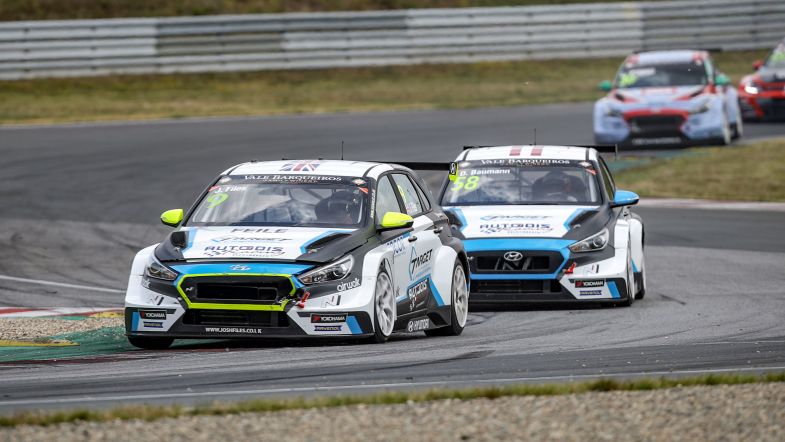 Josh Files crossed the line fifth, later promoted to third following penalties for Andreas Bäckman and Nelson Panciatici, and in doing so has extended his lead of the championship to 61 points. After the race, Files thanked his new team-mate for his support in the sister Target Competition Hyundai.

Files has been struggling throughout practice and qualifying with a handling issue, first put down to a subframe shift after hitting the new kerbs at the chicane in Free Practice 1, but with the team having resolved that overnight, the problem has persisted throughout qualifying and the first race.

“Whatever issue we had plaguing all through yesterday and qualifying is still there, so we’ll take the car to bits tonight and see what we can do tomorrow,” said Files to TouringCarTimes.

“That race was all about doing what we could with a car which was a bit limited. I have to give a huge thanks to Dominik Baumann, as I realised I still had the issue on lap one, and he didn’t attack me at all and he just let me drive – and that result was as good as we could have done today.”

Files finished fifth, 15 seconds off the lead, but was promoted to third after his team-mate Andreas Bäckman was excluded after his Hyundai i30 N TCR was found to be too wide, while Nelson Panciatici was given a time penalty for an incident on lap one with Jessica Bäckman.

The result means Files now has a 61-point lead in the championship, with 40 available in each race.