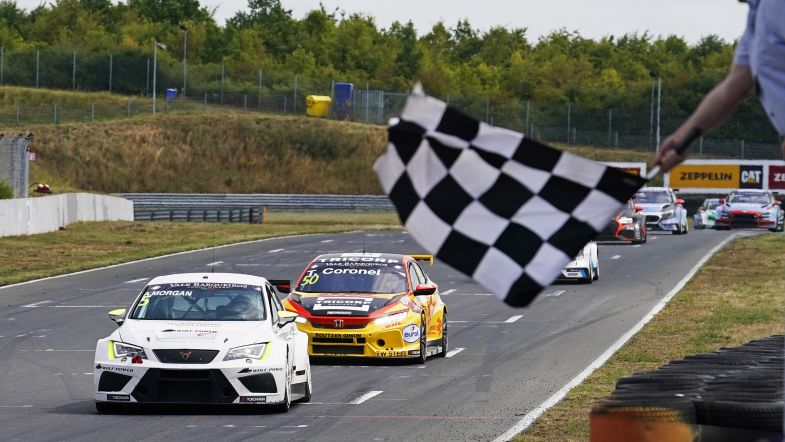 Alex Morgan has claimed his first win in the TCR Europe series at Oschersleben, holding off the Honda Civic TCR of Tom Coronel for 16 laps under intense pressure to score a maiden victory in the series, two rounds after switching cars.

Running in the ex-Halder Cupra TCR of Mike and Michelle Halder from the TCR Germany championship, Morgan secured pole position for the reversed grid in yesterday’s qualifying session, which he successfully converted into victory, after a problematic first race in which he was taken out in an incident with the rival Cupra of Davit Kajaia.

Morgan held the lead into Turn 1, and then fended off the Boutsen Ginion Civic TCR of Tom Coronel until the finish to become the second different race winner of the weekend, following on from fellow Brit Dan Lloyd’s win yesterday.

“I knew I had to nail the start, so I focussed so hard on getting that getaway and it went absolutely perfectly,” said Morgan to TouringCarTimes.

“I saw Josh (Files) got a pretty bad start, but then I saw Coronel was right behind me so I just had to get my head down and start doing qualifying laps.

“In the last laps, he started putting pressure on me, and it was a really tough race, but I’m absolutely delighted. I can’t believe what’s just happened, with such a small team, I’m absolutely chuffed.

“We’re on the most minimal budget possible so we’re always on the back foot, so this shows just what you can do with the right people around you. It’s fantastic to get this kind of result against some really talented drivers and some top teams.”