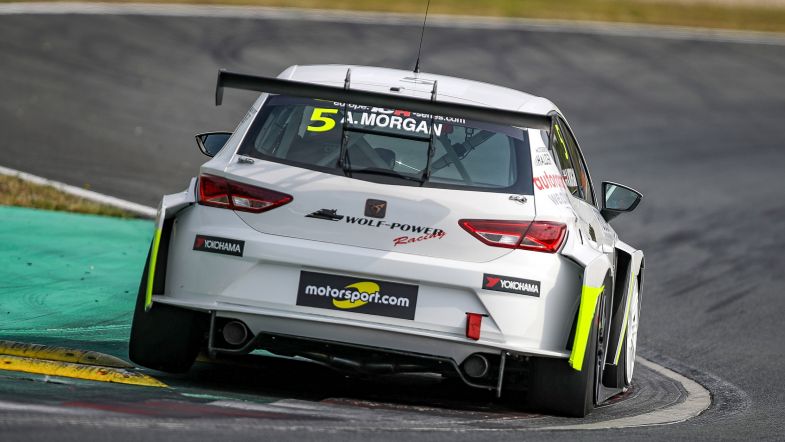 Alex Morgan has claimed his first win in the TCR Europe Touring Car Series at Oschersleben, leading from lights-to-flag in his Wolf-Power Racing Cupra TCR ahead of the Honda Civic TCR of Tom Coronel.

Morgan launched away well from the line ahead of the Target Competition Hyundai of Josh Files, who bogged down and dropped a spot to the Boutsen Ginion Honda of Coronel.

From then on, Morgan was forced to defend for the whole race from Coronel’s car, which appeared to move early at the start and has also been marked down for a jump start investigation.

Coronel kept Morgan honest throughout, crossing the line three-tenths behind, while Josh Files was a comfortable third, defended as he was yesterday by his team-mate Dominik Baumann behind.

Santiago Urrutia in the WRT Audi made his way forward from eighth on the grid, eventually finishing fifth, making his last pass on lap eight on Jessica Bäckman’s Hyundai.

Luca Engstler scored some key points with seventh, starting from 12th in his M1RA Hyundai, and moved back to second in the drivers’ standings.

The race was relatively incident-free, with just a few troubles. On lap five, the Hyundai of Mat’o Homola and the WRT Volkswagen of Maxime Potty came together, with Homola retiring with damage, while Potty continued on to finish in 20th.

Josh Files now extends his lead in the championship to 78 points over Luca Engstler, with Julien Briché third, a further ten points back, with the Frenchman picking up minor points after recovering to finish 14th in his JSB Compétition Peugeot 308TCR.

The next round of the 2019 TCR Europe Touring Car Series takes place at the Circuit de Barcelona-Catalunya in Spain on September 21st-22nd.