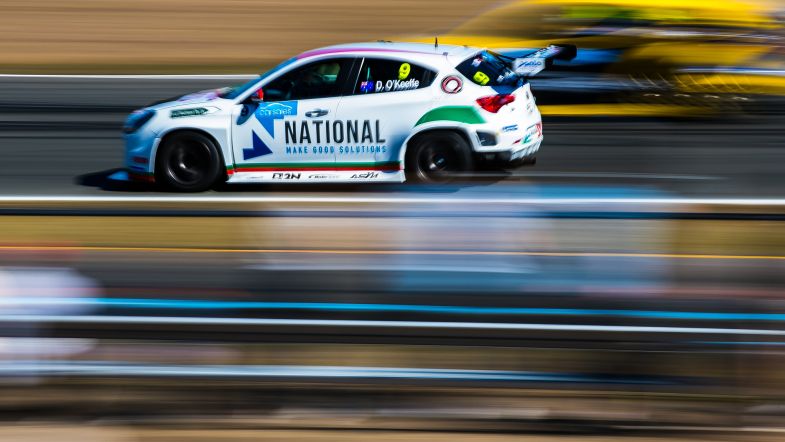 Dylan O’Keeffe completed his clean sweep of Sunday’s TCR Australia series with a victory in the closing race of the round after again capitalising on his pole position start.

The Ashley Seward Racing driver got out to an early lead from pole position and never looked back, easing his Alfa Romeo Giulietta Veloce to a second win of the day and the round win.

O’Keeffe made it look easy at the front of the field while his championship rivals were fighting in the middle of the pack, well and truly getting himself back into the title fight in TCR Australia’s inaugural season.

An even start off the line for the front row saw O’Keefee’s Alfa Romeo Giulietta Veloce and Russell Ingall’s Audi RS 3 LMS go side-by-side into Turn 1, the pole sitter prevailing as Tony D’Alberto tried to squeeze his Honda Civic Type R FK8 TCR amongst the pair.

Aaron Cameron in the Volkswagen Golf GTI TCR tried to go around the outside of D’Alberto at Turn 4 on the opening lap but lost ground after dropping off the road at Turn 5, sliding back to sixth place as the field completed the first tour.

O’Keeffe in the ASR Alfa Romeo started to extend his lead over Ingall’s Melbourne Performance Centre Audi, both streaking away from D’Alberto in third place. D’Alberto started to come under attack from Nathan Morcom’s HMO Customer Racing prepared Hyundai i30 N TCR who was having a hard time of keeping Cameron behind him.

Championship leader Will Brown started to make a few spots from tenth on the grid in his HMO Hyundai, putting in the fastest lap of the race but dropping back to eighth after he dropped his tyres off the road, having to go through it all again to get past Jordan Cox in the Garry Rogers Motorsport Alfa Romeo Giulietta Veloce.

Up front O’Keeffe continued to lead, taking his margin out to over two seconds with ten laps remaining as Ingall started to fall away, having a gap of under a second to D’Alberto and Morcom behind him. Another late resurgence from Ingall brought the Audi driver back into the mix but O’Keeffe had him covered, coming home to take the win by 1.2 seconds.

O’Keeffe’s win and third podium appearance for the weekend gives him the round victory as Ingall finishes the two days in second, edging out D’Alberto who finished in the top three twice on Sunday. Morcom was able to get past Cameron late in the piece, coming home fourth and fifth respectively while Brown remained in eighth at the finish despite taking the fastest lap of the race.

The next round of the season takes place on September 1st at Winton Motor Raceway.