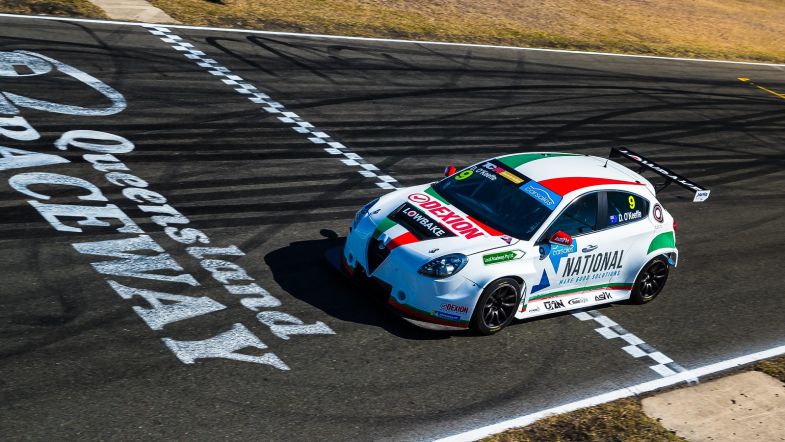 Dylan O’Keeffe has taken his first win of the Queensland Raceway round for the TCR Australia series leading from pole to the finish in his third victory of the season.

The Ashley Seward Motorsport driver inherited pole after Saturday winner Jean-Karl Vernay withdrew this morning due to illness, taking control of the race from when the lights went out and not looking back.

Though O’Keeffe seemed to have a stronghold on the race, a late charge from his rivals saw his lead of three seconds come down to under one by the end of the race.

From pole position, O’Keeffe made the best start off the line in his Alfa Romeo Giulietta Veloce, walking away from Russell Ingall in the Audi RS 3 LMS on the run to Turn 1. As the Ash Seward Motorsport driver took the early lead, Ingall’s Melbourne Performance Centre entry was under attack from Tony D’Alberto driving the Wall Racing Honda Civic Type R FK8 TCR.

D’Alberto got down the inside of Ingall and into second as the Supercars veteran came under attack from Jordan Cox’s Garry Rogers Motorsport Alfa Romeo, holding off the young gun on the opening lap. Further back from 15th on the grid, championship leader Will Brown started making up spots in the HMO Customer Racing Hyundai i30 N TCR, getting up to tenth in the opening laps.

O’Keefee stretched out a lead from D’Alberto and Ingall who kept fighting for second place, both letting Aaron Cameron in the MPC prepared Volkswagen Golf GTI TCR who was set the fastest lap of the race so far while trying to chase a podium finish.

D’Alberto proved to be the cork in the bottle as Ingall ranged up on his rear bumper, dragging Cameron with him in a battle of Wall Racing against Melbourne Performance Centre, meanwhile O’Keeffe’s lead extended out to three seconds as the pack behind him fought each other.

With nine laps remaining, Ingall made his move down the main straight and into Turn 1, getting past D’Alberto as Cameron tried to follow him through. While he couldn’t get the job done immediately, a dive under brakes into Turn 4 put the Golf past the Civic, moving Cameron up into the last podium position.

O’Keeffe retained the lead until the end of the race despite Ingall closing the gap by a second towards the end, claiming the fastest lap of the race in the process but having to settle for second as Cameron followed them home in third. D’Alberto had to settle for fourth as the Honda started losing a lot of ground to the podium finishers late in the race while Jordan Cox completed the top five.