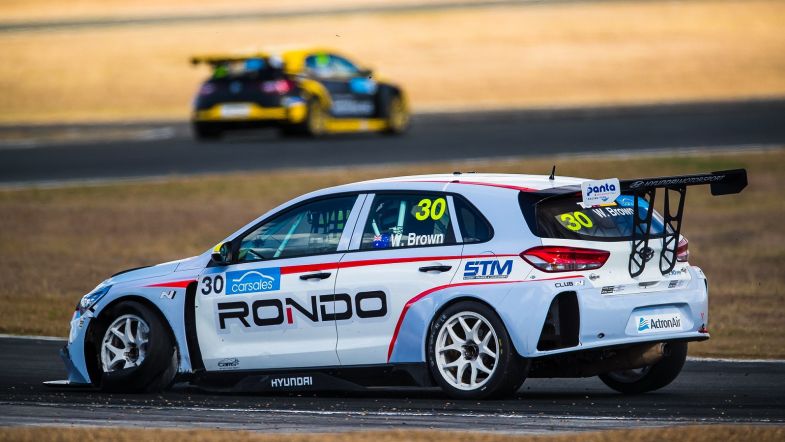 Championship leader Will Brown has lamented his misfortunes in this weekend’s TCR Australia series races after the HMO Customer Racing driver was caught up in the Race 1 incidents, providing a setback for the rest of the round.

On the opening lap of Saturday’s race, Brown tried to put his Hyundai i30 N TCR down the inside of John Martin’s Honda Civic Type R FK8 TCR, causing damage to both the HMO and Wall Racing entries.

Brown had to pit to repair a puncture on the next lap and was hit with a pit lane penalty due to shortcutting the circuit, finishing last in the opening race. With progressive grids, Brown had to fight back from down in the order on Sunday’s outings, winding up eighth in Race 3.

Speaking after the race, Brown said it was difficult to get past the cars in front despite having a better handling car, due in part to the speed of the Alfa Romeo Giulietta Veloce TCR and Renault Megane RS TCR.

“It was disappointing in that clash with John Martin, in any other circumstance it would’ve been no damage but the tyres hit together and got torn up,” Brown said to TouringCarTimes.

“It was pretty hard to get past, the Alfa and the Renault have good straight line speed; I passed the Alfa (Jordan Cox) out of Turn 6 and he passed me back down the straight! Their speed is a bit hard to compete with around here.

“Between the races we nearly didn’t get out; we were trying to bleed the brakes and change pads because we were getting brake fade. The initial hit on the pedal was okay but then it kept fading until we were nearly on the brake stop.

“A couple of times it was a bit nerve wracking so we’ve got to work on our brakes but it was a bit of a hard day.”

Setting the fastest lap of the race, Brown showed that the i30 N TCR has car speed but the circuit characteristics didn’t suit it as a race car when he was looking to move up the order.

“I think we got through a couple of cars pretty quickly and had a gap,” he said of the race’s quickest lap.

“The tyres hadn’t overheated and the car was still cool but once you get behind someone… compared to the Alfa we can produce a better time over a lap but in the straight line when you’re trying to race it, you can’t pass it.

“You can’t divebomb from too far back or you’ll just run into them.

“Winton will be easy compared to here because there’s not many long straights and a lot of corners so it’ll be good there.”

With his 125 point margin heading into the round at Winton Motor Raceway on September 1st being reduced to just 55 points now over round champion Dylan O’Keeffe, Brown will be looking consistency to close out the year as the championship passes the halfway mark.