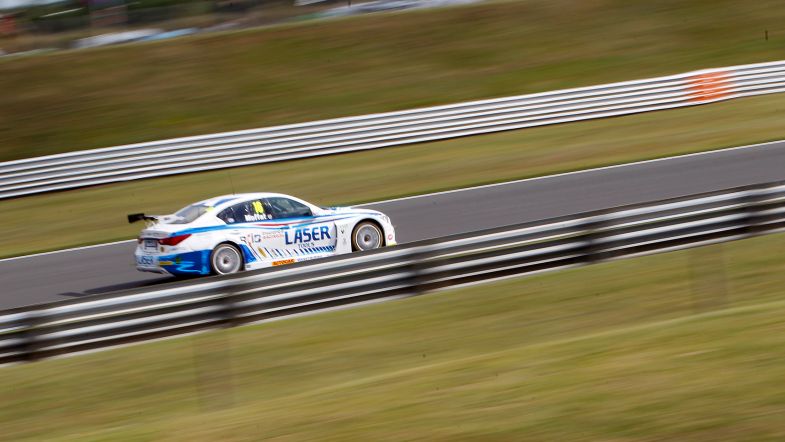 Aiden Moffat admitted he was delighted by his first outing in Laser Tool Racing’s new Infiniti Q50 after going close to a points scoring finish at Snetterton.

The team had originally planned to introduce the car for the 2020 BTCC season, but took the decision to switch from the Mercedes A Class it has used in recent years at the mid-way stage of the campaign.

The Infiniti was off the pace during the two-day tyre test last month when it hit the track for the first time running on RML parts, with the team admitting that there were a number of upgrades to be introduced in order to bring the car fully up to speed.

Some of those upgrades were in place for the Snetterton weekend, where Moffat showed improved pace in free practice and qualifying, even though he still qualified at the back of the grid.

Running the soft tyre in race one allowed him to fight his way through to 17th in the opening race of the weekend, whilst he then secured another top 20 finish in race two.

A 21st place on the hard tyre in race three capped a solid first weekend with the car, and Moffat was left pleased with the way things had panned out.

“I’m delighted with the weekend,” he said. “We fully expected to be at the back all weekend, so to make up twelve places in race one, and then get a top 20 again in race two was great as we didn’t expect that.

“We knew where we wanted to get to this weekend, but we took risks with the set-up to try and cover a lot of ground and get as much data as we could so the engineers have plenty to put through their simulators.

“It was all about trying to improve considering we’d done less than 100 laps with the car coming into the weekend. Now we have found two seconds and are closer to the pace, whereas we might as well have been in another series on the test day.

“There are things we got right and there are things we got wrong but this is pre-season testing for us – we’ve just started it six months early. There are a lot of upgrades to come and I need to keep learning about rear-wheel drive, but I’d say that was a successful start as we certainly got closer to the pace than we expected to.”