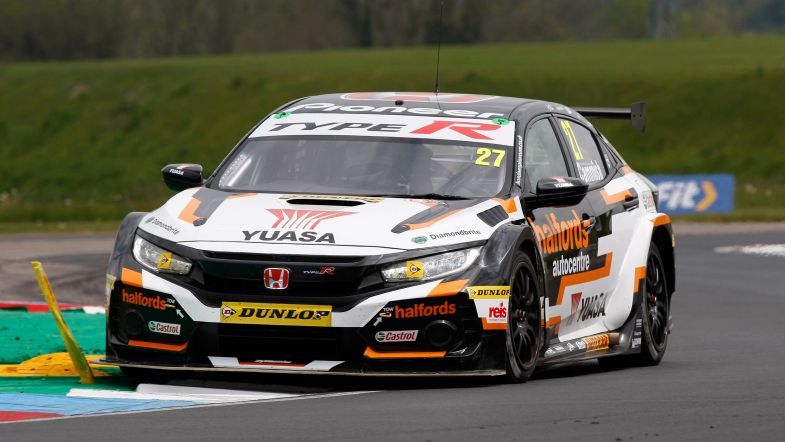 Dan Cammish toppped the times on a drying circuit as the British Touring Car Championship runners hit the track for the opening practice session of the weekend at Thruxton.

After rain throughout Friday and overnight, a damp circuit greeted the teams on Saturday morning, with a greasy surface rendering the early stages of the 40 minute session largely useless as drivers waited for the conditions to improve.

Less than half the field had set a timed lap by the half-way stage but as the conditions improved, so drivers started to chase a time, with Cammish eventually setting the benchmark in his Team Dynamics-run Honda Civic Type R.

A best lap of 1:16.888 saw Cammish as the only driver to dip below the 1:17s mark, although it was still more than a second off the pace that saw Sam Tordoff snare pole for round three at the Hampshire circuit back in May.

Behind Cammish, Ash Sutton was second quickest in his Subaru Levorg as he edged out the leading BTC Racing Honda of Josh Cook – with Cook slotting into third spot with a late lap having been one of the last drivers to chase a time.

Andrew Jordan slotted into fourth spot as best of the BMW drivers despite the ballast on his 330i M Sport thanks to his second place in the championship standings, with Adam Morgan showing improved pace in his Mercedes A Class to end up fifth.

The second of the Dynamics Hondas was sixth in the hands of Matt Neal, with Tom Ingram’s Toyota and the BMW of Tom Oliphant rounding out the top eight.

Dan Rowbottom produced his most competitive session showing of the season to post a top ten time in his Cataclean-backed A Class with the top ten completed by championship leader Colin Turkington.

In total, the top 16 drivers were covered by less than a second, although there were some noticeable names to be found lower down the order.

Tordoff would end up 20th having stopped on track mid-way through the session, with Cobra Sport AmD team-mate Rory Butcher back in 23rd. Motorbase pair Tom Chilton and Ollie Jackson split them on the times having failed to match the front-running pace shown at Snetterton.

However, improved conditions are expected for FP2 at 12:05 local time, with lap times set to get quicker as a result.