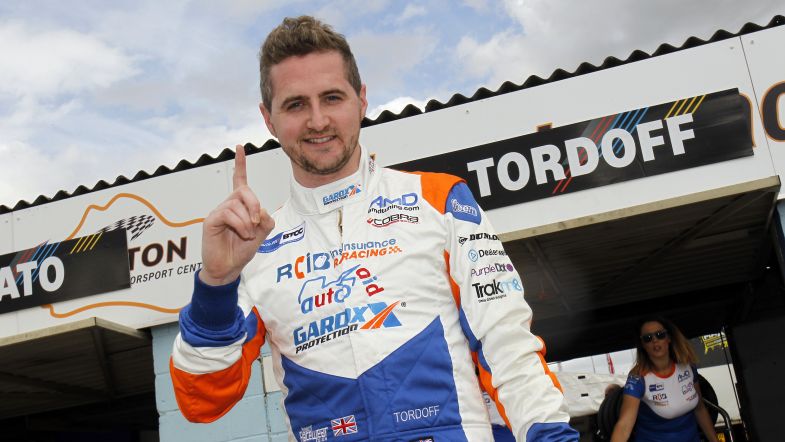 Sam Tordoff does the double with Thruxton pole

Sam Tordoff repeated his performance from the third meeting of the British Touring Car Championship season back in May to secure pole position for the latest rounds of the season at Thruxton.

The Cobra Sport AmD driver edged Jason Plato and Dan Cammish out of pole in a closely-fought session that saw a tenth of a second cover the top three drivers, with Tordoff eventually securing the place by just 0.014.

Light rain just before the session started threatened to throw a spanner in the works but the conditions would remain dry throughout; resulting in the quickest times seen so far this weekend.

Cammish, Ash Sutton, Adam Morgan and Rory Butcher would all take turns at the top of the times in the early stages of the session before Plato became the first driver of the weekend to dip below the 1:16s mark.

Morgan quickly followed suit in his Mercedes to slot into second behind the Power Maxed Racing man before Tordoff slipped in his fastest time to go into provisional pole.

Although his rivals would try to demote Tordoff from the top of the pile, the time would proved to be unbeatable despite being three-tenths of a second slower than the pole time from May.

Plato had to settle for second place to match his season best, with third for Cammish after he edged ahead of Morgan leaving him well placed for race day. A second row start for Morgan marks his best result of the season, and only the second time in 2019 that the Ciceley-run A Class will have started inside the top ten.

Josh Cook put his recent qualifying woes to one side to secure fifth for BTC Racing at his home circuit, with Butcher an impressive sixth despite the additional ballast on his Honda Civic thanks to his third place in the championship standings.

Championship leader Colin Turkington had to settle for eleventh place in his ballast-laden BMW but was still able to outqualify his closest challenger Andrew Jordan, with the Pirtek-backed racer lining up directly behind in 13th.

The pair will be split on the the grid by the Subaru of Ash Sutton, with the prospect of the three rear-wheel drive cars looking to make up places when the opening race kicks off on Sunday morning.

The session would pass largely without incident, aside from a clash between Mark Blundell and Sam Osborne at the Complex that left Blundell with a puncture and Osborne with broken suspension. The pair would end up 26th and 30th respectively as a result.

Race one on Sunday will get underway at 12:15 local time.