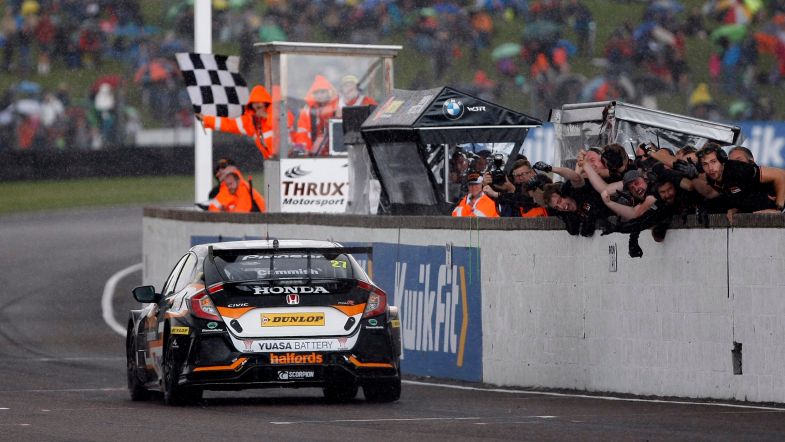 A win apiece for Dan Cammish and Josh Cook at Thruxton allowed both drivers to roar back into contention for the 2019 British Touring Car Championship title.

Heading into the weekend, much was being made of the battle between WSR team-mates Colin Turkington and Andrew Jordan but as the BMW pair battled found themselves fighting in the middle of the pack after qualifying outside the top ten in their ballast-laden cars, Cammish and Cook took advantage to draw closer in the standings.

Three top six finishes for Cook, including his race two win, mean the BTC Racing man has now closed to within 38 points of the championship lead whilst Cammish’s first win of the campaign in race three means he now sits third – just four points down on Jordan and 34 behind Turkington.

“It’s a weight off my shoulders and also great for the team because we’ve seen Hondas winning and we haven’t been doing it,” Cammish said. “We’ve been getting good points but haven’t had our name in lights and I felt this could be the day.

“Working with Barry and with Tom my engineer, we have worked hard on our side of the garage and when I got called on the front row for race three, I was confident. I knew we were carrying the same weight as in race one and had a better car and that was how it proved.

“I had to make a few overtakes and it was tough when the rain came at the end so it never comes easy, but to our first win of the year and close the gap in the standings is fantastic.”

Cammish’s weekend could have panned out differently had he not managed to prevent his Civic Type R from stalling at the start.

Instead, the reigning Jack Sears Trophy champion was able to recover from losing places at the start to ultimately secure the fifth place finish that then set up his race three success.

“That is as close as you can get to stalling and I was lucky to get the car going,” he said. “To come back to fifth with weight was good and had I not managed to finally get some luck in my direction and prevented the car from stalling, things could have been very different.

“It’s great for me, for Dynamics and for Honda and we’ve shown how important it has been to keep scoring points all season. Colin won the title with one race win last year and I came into the year knowing that points are going to make prizes.

“Every point counts and I’ve consistently been one of the top scorers after a tough start. We’re firing on all cylinders now and have three more rounds to try and turn this around.”