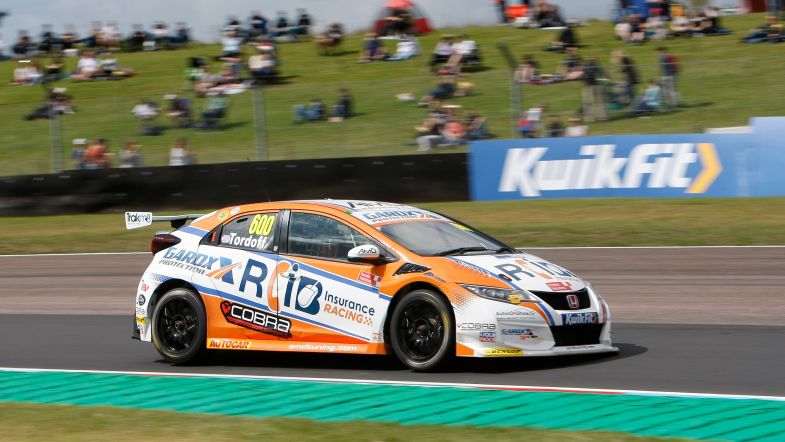 Sam Tordoff secured his first win of the 2019 British Touring Car Championship season with a lights-to-flag victory in the opening race of the weekend at Thruxton.

The Cobra Sport AmD driver had qualified on pole for the second time this year at the Hampshire circuit, and went into race day hoping to avoid a repeat of the issues that had robbed him of a win at the same track back in May.

Tordoff was able to maintain the lead on the run to the Complex for the first time ahead of a fast-starting Jason Plato and wouldn’t be headed from that point on, keeping a slender advantage over the chasing pack behind.

That chasing pack would be headed by the newer FK8 Honda Civic Type R of Dan Cammish after Plato was forced to pit at the end of lap two having been handed a drive through penalty for being out of position at the start, which dropped him to the back of the field.

Cammish’s bid to try and haul in Tordoff ahead was hampered by the fact that he was being kept honest by Adam Morgan’s Mercedes, with the pair running together throughout the 16 lap encounter.

It meant Tordoff was able to take his first victory of the campaign, with Cammish and Morgan following behind as the top three were covered by less than a second at the flag.

Just off the podium Josh Cook was fourth for BTC Racing, a second away from the top three but clear of the BMW of Tom Oliphant and the leading Vauxhall of Rob Collard, with both drivers enjoying somewhat quiet races with little in the way of action.

Rory Butcher was seventh in the second of the Cobra Sport AmD Hondas, with Matt Neal and Ash Sutton behind. Neal and Sutton were the two drivers to make noticeable progress through the field, with Neal racing his way from 17th to eighth and Sutton climbing from twelfth into ninth despite the fact that the Subaru continues to struggle for pace at the fastest circuit on the calendar.

Chris Smiley rounded out the top tena ahead of title rivals Andrew Jordan and Colin Turkington, with Jordan taking a single point out of Turkington’s advantage to bring the gap between the pair down to 35.

Jordan would get ahead of Turkington on the opening lap when the points leader ran wide through Goodwood whilst side-by-side with Sutton, and then managed to stay ahead to the finish, with the pair hoping to benefit from losing their success ballast in race two at 14:35 local time.

After taking his penalty, Plato would end up 17th as he missed out on a points finish.