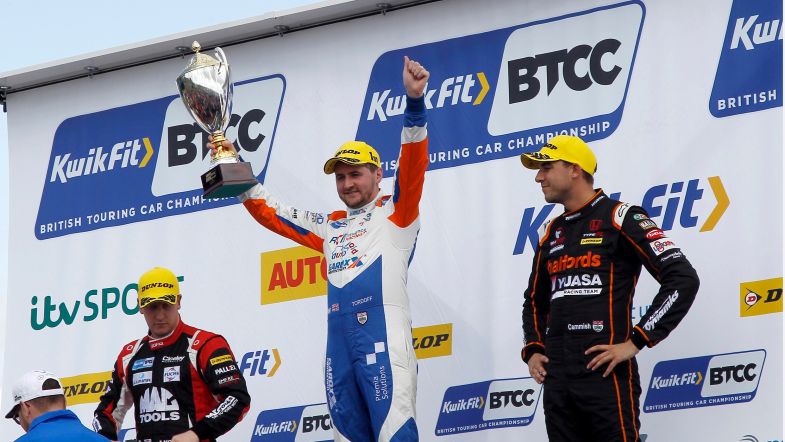 Sam Tordoff admitted he was delighted to secure an “overdue” first victory of the British Touring Car Championship season at Thruxton.

The Cobra Sport AmD driver had looked well set to open his account during the first trip to the Hampshire circuit back in May, only for a power steering issue whilst leading the first race to rob him of what looked to be a certain victory.

With his Honda Civic Type R free of any success ballast, Tordoff secured pole for the second time at the circuit this season, and was then able to lead the opening race from the front, keeping Dan Cammish at bay to take the team’s third success of the campaign.

It would prove to be the highlight of the day after debris caused a race two water leak that dropped Tordoff back to tenth place, with the team then working to replace the engine on his car to ensure he was able to take part in race three – securing more points with eleventh.

The former series runner-up now sits ninth in the standings heading to Knockhill next month.

“Overall it’s been a really good weekend,” he said. “To secure pole position and then lead the first race from start-to-finish – and set fastest lap – was perfect, and it was a result that I feel was long overdue after what happened the first time we were at Thruxton.

“It isn’t easy to lead round Thruxton because you don’t have that reference point in front of you when it comes to the braking zones and you always have to be on your guard. Dan was keeping me honest behind and it certainly wasn’t as easy as it might have appeared to people watching.

“It was probably the longest 16 laps of my life, but that makes it all the more rewarding and it was great to stand on the top of the podium.

“From there, we shouldn’t have even finished race two with the problem we had with the car as the engine was cooking itself from early on and we somehow managed to get a top ten. The team did a great job to get me out for race three, and to secure more points there was a bonus – we really pulled something from the jaws of defeat in those two.

“It’s good to be back into the top ten in the standings, and now we’ll have to see what Knockhill brings.”