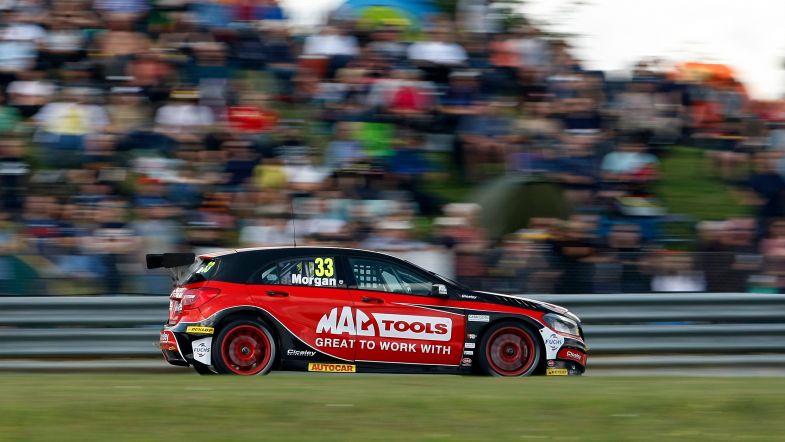 Adam Morgan insisted that his Ciceley Motorsport team had “proved a point” after bouncing back to form in the latest rounds of the British Touring Car Championship season at Thruxton.

Morgan had endured a trying campaign at the wheel of his Mercedes A Class with just one podium finish at Brands Hatch and no fewer than nine no scores – as many as he had registered in the whole 2018 season.

Having scored just one in previous six races, Morgan and the Ciceley squad elected to make a behind-the-scenes change for Thruxton as ace engineer Paul Ridgway was brought back into the fold along with Steve Farrell – who has worked with Morgan in the Chinese Touring Car Championship.

With a fresh pair of eyes looking over the car, a revised set-up saw the Mercedes transformed as Morgan qualified well and then picked up third in race one and second in race two.

Despite the team being forced to change the engine ahead of race three, Morgan then took secured a strong fourth place finish with the points scored seeing him move back into the top 15 in the standings.

“We swapped driver this weekend and I just walked round in the suit after the races to pretend it was still me!” he joked of the transformation. “It’s been a total turnaround from the season we’ve been having when you look at where we were prior to Thruxton to what has just happened. It’s the second most successful season we’ve had in the BTCC, which is phenomenal, but the team has never given up and has kept pushing.

“Paul and Steve have worked their magic this weekend and we got them back in to show the car was still capable of running at the front and was still a car that could win in the BTCC. They gave us a set-up that we’ve hardly had to touch since FP1 and the car has been rapid. To be honest, I’m a bit blown away by it all.”

Morgan’s strong showing, as well as points for Dan Rowbottom in the sister Cataclean-backed car, were a sign that there is life still in the Mercedes despite the Laser Tools Racing squad having elected to ditch it’s A Class to switch to an Infiniti Q50 over the summer.

“This whole weekend has proved what we wanted to prove,” Morgan said. “We didn’t want to get to the end of the season and not know if the car was still competitive or if it was still capable of fighting for the podium and being quick.

“With the NGTC rules, you can spend loads of money on new cars and change everything but you’re still using the same parts underneath so there is no reason why this car that has been on the podium countless times can’t be there again. We’ve now seen that first hand and I’m confident we can build on these results going forwards.”