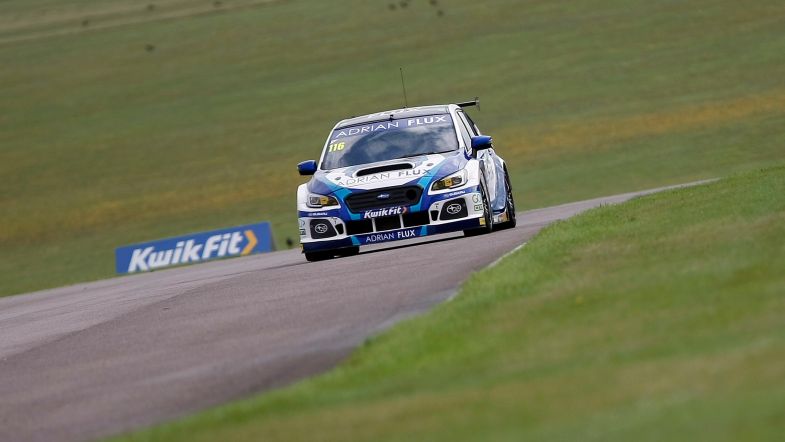 Ash Sutton admitted that a lack of straight-line speed in his Subaru Levorg was making life hard after another tough weekend on track at Thruxton.

The former British Touring Car Championship title winner headed to the Hampshire circuit looking to try and repeat the podium finish he secured back in May but was aware that it would be far from easy at the quickest circuit on the calendar.

Having qualified outside the top ten, Sutton was left to try and fight his forwards in races one and two with an aim being to then benefit from the reverse grid draw for race three – as he had done earlier in the year.

Bringing home a ninth place in race one, Sutton then survived a high-speed moment at Village in race two before taking eleventh.

Missing out on the reverse grid, Sutton then had to settle for ninth in the final race of the weekend and slips to sixth in the standings as a result.

“That was another tough day at the office,” he said. “From the start of the weekend I was on the absolute limit and I think the only way I could have gone any quicker was if the track was a bit wider!

“Coming into the weekend we knew it was going to be difficult but there really was nothing more to extract from it; our qualifying trim is our race trim. I had to really get my elbows out to stay in the fight, and that huge moment in race two was quite something as well.

“One lap pace is what kept us in the mix, and through the corners we were able to remain in the hunt as the chassis is mega – it’s getting swallowed up on the straights that just makes the racing that much harder.”

Sutton added that he was hopeful of a stronger showing at Knockhill, with the soft tyre being better suited to the rear-wheel drive Subaru.

“Everyone in the team is doing an amazing job and we will keep going,” he said. “I’m not sure how Knockhill will go for us but we will give it everything we have; the saving grace there is that the soft tyre will be available to use and we’re normally strong on that.”