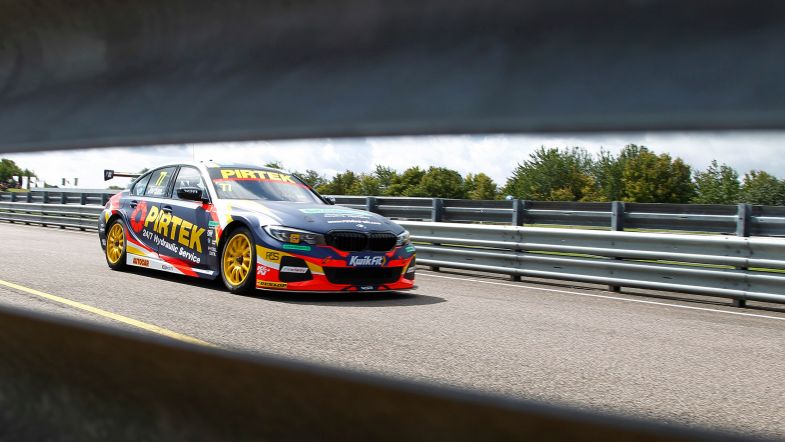 Andrew Jordan: “It could have been so different”

Andrew Jordan admitted there was some frustration at only taking six points out of Colin Turkington’s British Touring Car Championship lead at Thruxton.

Jordan went into the weekend sitting 36 points behind his fellow WSR driver, with the pair finding the going tough during the second meeting at the high-speed Hampshire circuit.

Neither was able to break into the top ten in qualifying with their ballast-laden BMWs and then struggled to make too much progress in the races – with the pace of the front-wheel drive cars making it difficult to fight up the order.

Twelfth and seventh place finishes in the opening two races saw Jordan twice finish ahead of Turkington and he looked good to take a big chunk of points out of the defending champion with a strong start to race three seeing him vault up into fourth.

However, contact from Tom Ingram’s Toyota ultimately dropped Jordan back down the order and although he would once again finish ahead of Turkington, the 2013 champion was left to wonder what might have been.

“It’s difficult when you have a weekend like this when you are fighting in the pack,” he said, “and frustrating to be in a position that we shouldn’t really be in. With the changes that have been made, it’s been a tough weekend and we had to just try and maximise what we could from where we qualified.

“I think that is what we ultimately did, although I think we could have got more in race three without the contact as that ruined my good start. Had we got in clean air, I think we could have had a go but I dropped loads of positions and then when the rain came, we couldn’t compete against the front-wheel drive cars on slicks in those conditions.

“I’ve taken points out of Colin in all three races which is good, but at the same time, I know we need to take more in the meetings that are still to come. We head to Knockhill next and I think that that is a circuit that will play into our hands a bit more, and hopefully we can be right back at the sharp end of the grid.”