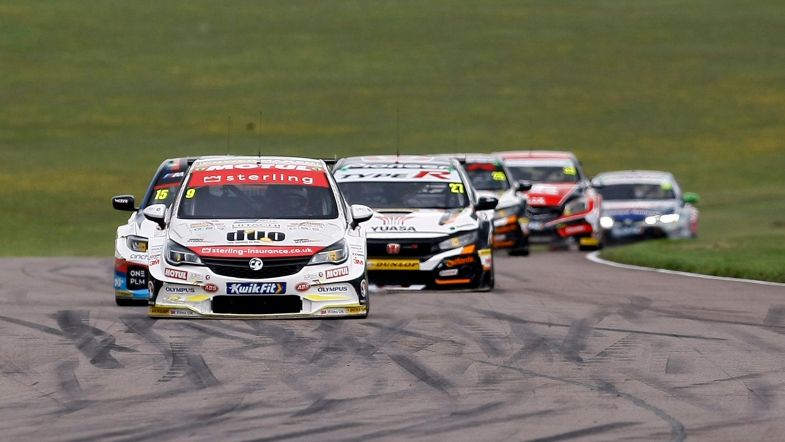 Rob Collard said he was delighted to return to the BTCC podium for the second time this season after a strong showing on home soil at Thruxton.

The Power Maxed Racing driver had gone into the weekend looking to build on a fourth place finish in the final race of the previous round at Snetterton.

The 50-year-old would ultimately enjoy his best weekend of the season to date in his Vauxhall Astra, qualifying inside the top ten and then taking sixth place in the opening two races.

Placed on pole thanks to the reverse grid draw, Collard then led the final race until a small error at Church allowed the Honda of Dan Cammish to get a run going up Woodham Hill, with the arrival of rain then preventing Collard from trying to reclaim the place as he instead had to settle for second.

However, the former WSR driver admitted he was delighted with the weekend results as he continues to get used to the switch back to front-wheel drive.

“I’m really happy for the team, with two P6s and a podium,” he said. “Obviously I’m gutted that we didn’t get a win and until the rain came down we had it managed.

“I’m pretty sure that had it not rained we had that in the bag, as I’d pulled out a measured gap and had it all under control. It would’ve been brilliant to take our first win in the car at my home circuit, but I’m leaving happy with the result.

“The car felt great this weekend; I’m finally getting the hang of this front wheel drive malarkey again.”