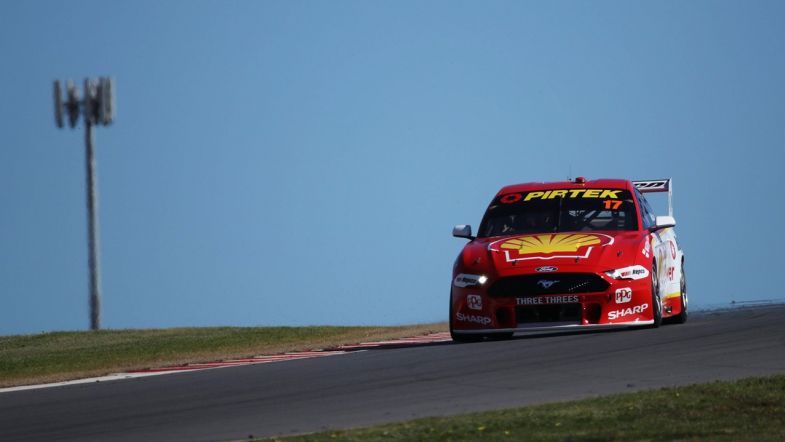 Scott McLaughlin heads Mustang domination in practice at The Bend

Supercars Championship leader Scott McLaughlin put himself at the top of the timesheets across the two main driver practice sessions at The Bend Motorsport Park, breaking the lap record in the process.

The DJR Team Penske driver rolled out of the box strong early in the day, going three-tenths clear of the pack in Practice 1 before further lowering the bar in the closing hit-out, resetting the Supercars lap record around the circuit by half a second.

A 1:48.1044 in the closing laps of Practice 2 put him half a second clear of Chaz Mostert in the Tickford Racing Ford Mustang in second place as the Blue Oval swept the top five spots.

An impressive session for the Mustang runners has seen all of the Ford drivers advance to Qualifying 2 tomorrow with Cam Waters, Fabian Coulthard and Lee Holdsworth taking third, fourth and fifth respectively while Will Davison and wild card Thomas Randle squeezed in to the Top 10, finishing in ninth and tenth.

Randle was the standout driver of the day, first going fastest in the additional drivers session before Practice 1 and then backing up the performance by getting himself straight into the second qualifying session tomorrow.

While both Erebus Motorsport cars of David Reynolds and Anton de Pasquale, as well as Rick Kelly in the Kelly Racing Nissan Altima, advanced through by finishing in the top ten, the talk of the day was around both Triple Eight cars finishing outside the top ten in both sessions.

Shane van Gisbergen could only manage twelfth and 16th across the two sessions respectively, while Jamie Whincup struggled and didn’t finish in the top half in Practice 1 or 2, finishing up in 19th and 25th on a track where the team swept both races last year.

The majority of the field ended up mowing the grass in the practice sessions after suffering a lack of grip in the triple-left complex of Turn 8, 9 and 10, showing the balance of the cars at the limit.

Practice 3 begins tomorrow at 10am local time, giving teams a chance to dial in their setups before the three-part qualifying starts at 12:35pm. Saturday’s 120km race will get the green flag at 3:25pm as Triple Eight looks to return to their form from 12 months ago.