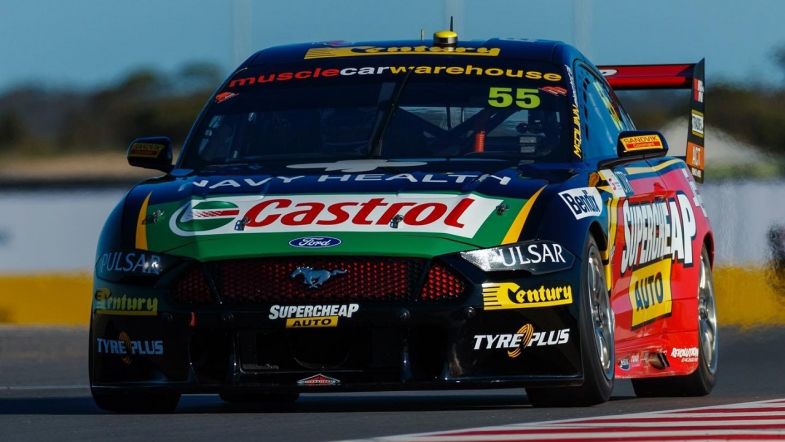 Chaz Mostert has come through at the death of qualifying to take pole number three for his 2019 season as the Tickford Racing driver reset the lap record at The Bend ahead of today’s race.

The young gun was able to string together a perfect lap as the final qualifying session ended, making use of the high-grip conditions to jump up to the pole position in the dying moments.

Starting on an all-Ford front row, Mostert is searching for a race win after last experiencing a top-step appearance on the podium way back at Albert Park in March.

On an improving track, the closing laps netted a big gain for a majority of the 16 runners in the opening qualifying session with Jamie Whincup going quickest in the Triple Eight Holden Commodore after struggling throughout the weekend.

The opening sets of laps in the second qualifying hit-out looked to be important for those who got out on track early as a shower hit the circuit half way through the session. Cam Waters led the way in his Tickford Racing Mustang with a time of 1:48.5000 when the road started to get wet but the track improved towards the end of the ten minutes.

With the track regaining grip on the final lap, the order in the top ten shuffled with Waters remaining at the top, just ahead of the Triple Eight pair of van Gisbergen and Whincup in second and fourth with the DJR Team Penske drivers in third and fifth for Scott McLaughlin and Fabian Coulthard respectively.

Waters’ team-mates Chaz Mostert and Will Davison got into the top ten as well as Winterbottom, Heimgartner and Anton de Pasquale as the only one of the Erebus Motorsport cars through to the final stage of qualifying.

As light rain started to fall again on the circuit the remaining top ten cars hit the track for their final attempts at pole position. McLaughlin was the fastest of the field on the opening tours, resetting the lap record with a 1:47.6968 and going over three-quarters of a second faster than Mostert in second.

With McLaughlin parked up before the clock hit zero, the rest of the field bar team-mate Coulthard returned to the circuit for one last lap. Mostert was able to string together a strong lap across all sectors to snatch pole from McLaughlin, posting a 1:47.5227 to his third pole of the season.

Winterbottom was able to slot himself into third, being the fastest Holden along with de Pasquale on the second row of the grid. Waters and Heimgartner will line up on row two while the decision to park Coulthard before the close of the session saw the #12 car drop to seventh.

The Triple Eight cars of van Gisbergen and Whincup occupied eighth and ninth on the timesheets while Davison spun out and off the track on his final lap, finishing the session in tenth.

Race 21 will begin at 15:25 local time as the field battles it out for victory over the 120km race distance.