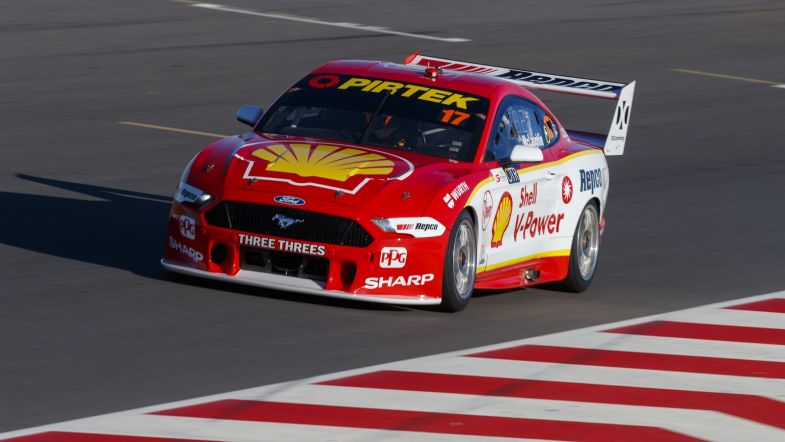 Scott McLaughlin has added another race win to his title defence tally after the DJR Team Penske driver took his first win at The Bend Motorsports Park in Saturday’s 120km sprint race.

After McLaughlin and his team struggled at the same round last year, the championship leader made the most of a front row start to get into the lead and control the race, coming home over well clear of polesitter Chaz Mostert in the Tickford Racing Mustang.

The win comes on a weekend of domination for the Blue Oval so far, giving Ford its first win at The Bend and piling on more wins to the marque’s list this year.

An even start off the line from McLaughlin and Mostert from the front row saw the championship leader take the race lead on the cleaner side of the track, with Mostert filing back in to second into Turn 1.

Anton de Pasquale moved up to third from fourth on the grid in the Erebus Motorsport #99 Commodore, beating Mark Winterbottom’s Team 18 car on the run to Turn 1.

As the field filed through the first turn, contact in the back of the pack saw Tickford wild card Thomas Randle and Macauley Jones’ Brad Jones Racing cars spin, dropping down the order early in the race.

Contact at the hairpin between Rick Kelly’s Nissan, James Courtney in the Walkinshaw Andretti United Commodore and Will Davison on the opening lap saw the 23Red Racing car spin, being collected by Simona De Silvestro’s Kelly Racing car and Matt Stone Racing’s Todd Hazelwood as the pack came through. The damage to Davison, De Silvestro and Hazelwood took the trio out of action as the race stayed green.

As the race settled into a rhythm, McLaughlin set a new race lap record on lap four, getting a small gain over Mostert who was the first of the pair to stop for tyres on lap eight, looking for an undercut when he rejoined after taking on all bar the right front tyre.

McLaughlin moved to block the undercut on the next lap, coming in for his stop on the left side only as Mostert set the fastest middle sector of the race. Though McLaughlin rejoined the circuit in the lead, his advantage over Mostert was reduced relative to before the pit stops.

As their tyres started to heat up, Mostert bettered McLaughlin’s lap record time in the hunt for the effective race lead, closing up to the back of the #17 and getting to within a second of the DJR Team Penske Mustang.

de Pasquale relinquished the lead on the 12th lap, stalling as his stop finished and only just avoiding the DJRTP entry of Fabian Coulthard as he got back into the pit lane. Rejoining the circuit in a rather distant third place, de Pasquale remained ahead of Winterbottom and the Kelly Racing Nissan of Andre Heimgartner behind him.

The Triple Eight pair of Shane van Gisbergen and Jamie Whincup had two different races despite being in sixth and seventh just past the halfway mark. While Whincup pitted early and had enjoyed the benefit of an undercut, van Gisbergen went longer in his first stint and was looking to make the most of fresh tyres, hunting Heimgartner for fifth.

A very late stop for both Nick Percat and David Reynolds on lap 18 put the Brad Jones Racing and Erebus Motorsport drivers in the battle pack for seventh. Percat dropped in behind van Gisbergen while Reynolds had to yield behind Whincup, soon making short work of the #88 on fresh tyres.

Winterbottom’s fourth place came under pressure in the final laps with Heimgartner, van Gisbergen, Reynolds and Percat behind all on fresher tyres than the #18 but unable to make a pass for the spot as the Holden man held off his pursuers for the position.

McLaughlin was able to hang on to his lead to the flag, taking the victory with a comfortable margin over Mostart as de Pasquale took his second career podium in third place. Winterbottom hung on for fourth, leading Heimgartner, van Gisbergen, Reynolds, Percat, Cam Waters and James Courtney in the top ten spots.