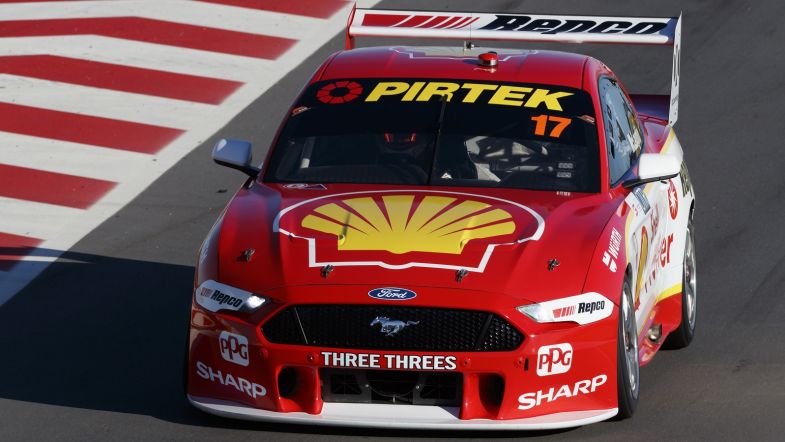 Scott McLaughlin has taken his 14th pole position of the 2019 Supercars Championship season at The Bend, taking a new lap record in the process after missing out on the prime grid spot yesterday.

Going quickest in the last two qualifying sessions, the DJR Team Penske driver stamped his authority over field with a margin over just over two-tenths of a second and the fastest lap for a Supercar at the relatively new circuit.

McLaughlin’s lap headed up a big session for the Ford Mustang drivers with five of the seven Blue Oval runners making it in to the top ten ahead of this afternoon’s race.

A vast improvement for the Triple Eight Holden Commodores of Jamie Whincup and Shane van Gisbergen saw both drivers drop over half a second from their morning practice times, going to the top of the order in the first half of the opening qualifying session.

The end of the ten minute session saw TIm Slade put his Brad Jones Racing Commodore into third, just ahead of team-mate Nick Percat. Mark Winterbottom made it three Triple Eight Commodores into the top six of the session while James Courtney dragged the Walkinshaw Andretti United #22 through to qualifying two.

Scott McLaughlin was on track to post the quickest lap in the opening segment of qualifying two but the DJR Team Penske driver ran off the road at the second last corner, forcing him to abort the lap while Saturday’s pole-sitter Chaz Mostert put his Tickford Racing Mustang into first position.

With the field back out for their last runs, McLaughlin and the two Triple Eight cars sat outside the top ten, all yet to post a competitive time. Stringing together a clean lap, McLaughlin got up to first place on a 1:47.6204, just a tenth clear of 23Red Racing’s Will Davison in second with Mostert in third.

Cam Waters made it three Tickford cars in the top four while Percat was the best of the Holden’s in fifth. Lee Holdsworth put his Tickford Mustang into sixth with Winterbottom and Whincup through to the final session, along with Anton de Pasquale in the Erebus Motorsport #99 and Slade rounding out the elimination session.

Fabian Coulthard was unable to get into the last portion of qualifying in the DJR Team Penske #12 car, just head of Andre Heimgartner’s Kelly Racing Nissan. Courtney struggled through the sesion, ending up just ahead of Kelly Racing’s Simona de Silvestro, David Reynolds in the second Erebus Motorsport car and Shane van Gisbergen who could only manage 16th on the grid.

The opening account of laps in the final session saw McLaughlin post a new lap record on his first tour, posting a time of 1:47.4959 to go three tenths quicker than Davison in second, followed by the rest of the Tickford Mustangs in the top five.

Whincup improved on his final run, moving up to fourth provisionally with his best run of the weekend. Despite setting the fastest middle sector, Mostert couldn’t improve, settling for third behind Davison and McLaughlin at the top.

Waters was able to head up the third row of the grid in fifth with Percat beside him, out-qualifying de Pasquale and Holdsworth on the fourth row as Winterbottom and Slade rounded out the top ten.

The weekend’s final, 200km race will kick-off at 13:40 local time with McLaughlin starting from pole, looking to match Craig Lowndes’ 1996 record of 16 wins in a season.