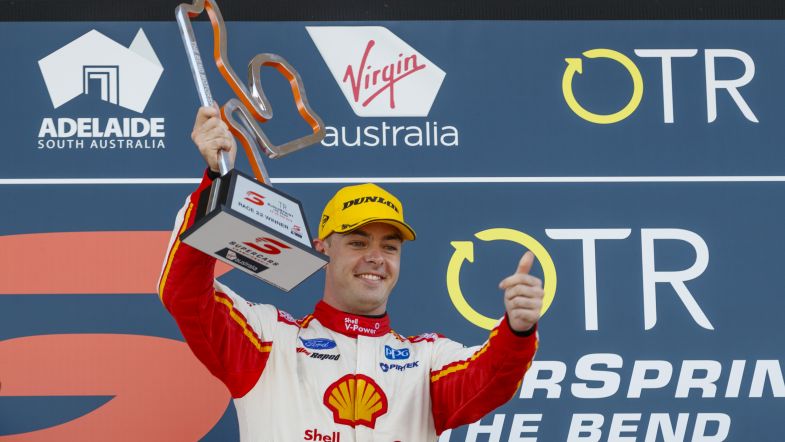 The record of 16 wins in a Supercars Championship season has been matched aftrr Scott McLaughlin took victory in Sunday’s 200km race at The Bend Motorsports Park, equalling a 23-year-old record.

Converting pole position into victory, the DJR Team Penske driver has now racked up 16 wins this season, drawing level with the record set by Craig Lowndes in his debut season of 1996, while extending his championship lead out to 573 points over second place.

It wasn’t a straightforward race at the beginning for the defending champion, having to fight his way back up the order after a tardy start left him vulnerable to his rivals.

Despite starting from pole, McLaughlin couldn’t get the #17 off the line well, losing the lead into Turn 1 to Will Davison’s 23Red Racing machine. Davison had to block into the first corner as a fast-starting Jamie Whincup got past McLaughlin in the Triple Eight Holden Commodore, challenging his close friend Davison throughout the opening lap.

An attempt at the lead from Whincup at Turn 3 on the second lap meant the #88 lost ground, going side-by-side with McLaughlin into Turn 4 and losing the position, having to defend third spot from Tickford Racing’s Chaz Mostert who was trying to get amongst the lead battle.

McLaughlin started to apply the pressure to the back of Davison only a few laps in, getting within a car length on the fifth lap while Whincup started to reel the gap to the #17 back in, dragging Mostert with him. Behind them the battle for fifth place tightened up between the Brad Jones Racing Commodore of Nick Percat and Anton de Pasquale’s Erebus Motorsport Commodore, the BJR driver getting an early edge for the spot.

On lap ten McLaughlin and de Pasquale made their first pit stops, looking for an undercut over their on-track rivals. McLaughlin emerged in clear air as Davison pitted on the next lap, coming out in front of the #17 but with a smaller fuel load on board, hoping to take advantage of track position.

Mostert finally got past Whincup at Turn 14 on lap eleven, taking the lead of the race as Whincup pitted just after the pass was made. The Sunday race winner from 2018 was able to come back onto the track behind McLaughlin with a gap, giving space to set fast times in the second stint.

Relinquishing the lead, Mostert’s stop came on lap 13, taking on a bigger drop of fuel than Whincup, subsequently filing back on track behind the #88. With only van Gisbergen in the other Triple Eight car to pit, Davison held the effective race lead over McLaughlin, Mostert, Whincup and Cam Waters in the #6 Tickford Mustang on lap 15.

As the race passed the critical lap to make it home on fuel, Waters and de Pasquale came in for their pit stops on lap 15 with the Erebus driver jumping up ahead of the Tickford car thanks to a shorter fuel stop. McLaughlin followed suit on the next lap around, taking on four tyres and a full load of fuel to the end while coming back onto the track with no one around him.

Davison copied McLaughlin on lap 19, taking a slightly longer stop thanks to his shorter first stop, losing a position to McLaughlin on pit exit. Mostert’s second pit stop came slightly later on lap 21, returning to the circuit just behind Davison and ahead of de Pasquale.

Whincup was the last of the lead bunch to react to the second round of pit stops on lap 23, rejoining just behind Mostert who was starting to harass the back of Davison, attempting a few lunges on the other Tickford car as Whincup kept gaining time on the pair.

Pitting from the lead, van Gisbergen came in for his final stop on lap 29, taking sixth on track after starting down in 16th. Percat stood in fifth and was the only car in sight of the Kiwi who wanted to salvage a top five result from the lacklustre qualifying performance.

Whincup was driving in a solid fourth place until he ran wide at Turn 8 on lap 36, dropping a spot to Percat as he tried to get back on the track after a trip through the grass.

McLaughlin cruised home at the front to the victory with a healthy gap over Davison who was able to hold off Mostert for the second step on the podium. South Australian local Percat kept Whincup at bay after the seven-time champion’s mistake as the Triple Eight driver rounded out the top five.

Heading to his home race at Pukekohe in New Zealand, McLaughlin now enjoys a healthy championship margin after taking all 300 available points across the Supersprint round at The Bend.