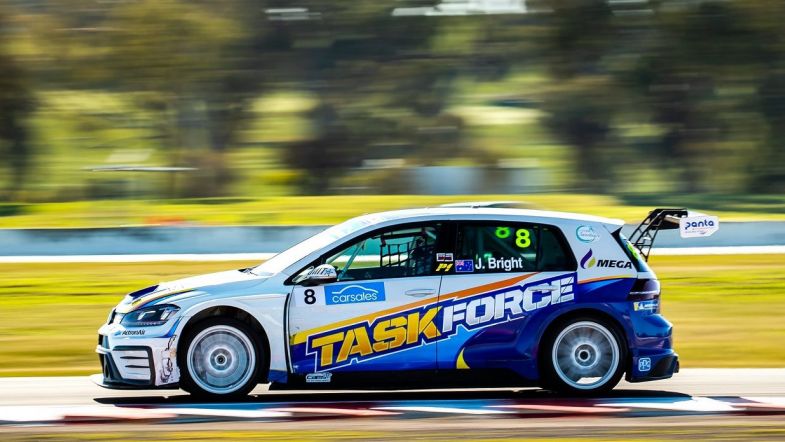 Jason Bright has taken his second win in the TCR Australia series after putting in a clean and consistent performance in the first race of three at Winton Motor Raceway.

The Matt Stone Racing driver kept out of trouble in the opening laps, pulling out to a healthy lead and staying there in his Volkswagen Golf GTI TCR to take his first win since the opening race of the championship in May.

An extra warm up lap delayed proceedings after the Garry Rogers Motorsport entries of James Moffat and Chris Pither had issues on the way to the grid in their Renault Megane RS TCRs. Moffat suffered a mechanical drama during the formation lap while Pither pulled in to the pits as the field found their grid spots, continuing a tough year of reliability for the squad.

A quick run off the line from Andre Heimgarter in second on the grid saw the Kelly Racing driver put his Holden Astra TCR into the lead, getting past polesitter Will Brown into the first turn. Brown struggled on the opening lap, his HMO Customer Racing Hyundai i30 N TCR dropping spots to John Martin’s Wall Racing Honda Civic Type R TCR.

Martin got by Heimgartner for the lead towards the end of the opening lap, leaving the Kiwi open to an attack from Brown behind. As the leading Honda started to open up a gap at the front, Brown got past Heimgartner for second and set his sights on the leader.

Brown challenged Martin for the lead at the final corners of lap five, briefly getting past but contact between the pair put the Hyundai off the road, dropping to third as Bright took second place and then the lead when Martin lost ground thanks to his left front tyre sustaining a puncture.

Bright retained a comfortable lead throughout the race and until the end, enjoying a margin of just over a second from Brown with O’Keeffe just behind his championship rival. Further back behind the eventual podium finishers, Tony D’Alberto was engaged in a fight in his Honda Civic with and Aaron Cameron’s Melbourne Performance Centre Golf GTI TCR.

Cameron was unfortunate to lose the fifth place finish after going off the road at the final two corners on the last lap, conceding the spot to Nathan Morcom in the #11 HMO Customer Racing Hyundai, making it a double top five for the i30 N TCR runners.

Tomorrow’s first race beings at 1:15pm local time followed by the closing race of the round at 2:20pm.