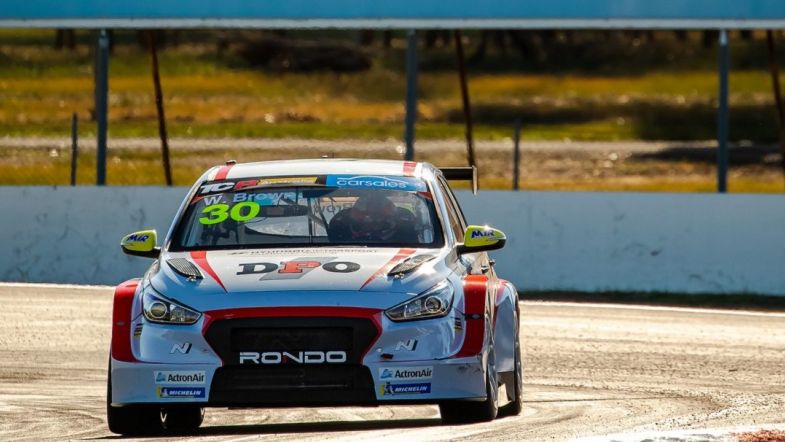 Points leader Will Brown: “It felt like we were a battering ram”

The top two finishers in today’s opening TCR Australia series race at Winton Motor Raceway have told different accounts of their Saturday at the rural Victorian venue as they encountered different experiences en route to the podium.

For race winner Jason Bright, the Matt Stone Racing driver was able to inherit the lead just before the halfway point, retaining the top spot until the end to give his Volkswagen Golf GTI TCR another victory for the year.

Despite having a tough season after taking the first win of the championship season, Bright says the strength of the Volkswagen took him to the win.

“It puts a distant memory on the last couple of rounds,” Bright said.

“The car was really good; on the first couple of laps you could see everyone struggling for tyre temp and we were actually pretty strong in that first little section. It took a few laps to get past Andre (Heimgartner) but the car was strong all race.”

Finishing in second, championship leader Will Brown could have won from pole but got caught up in an incident while trying to take his HMO Customer Racing Hyundai i30 N TCR into the lead.

A strong recovery meant Brown extended his lead in the title race even though he felt like a target was on the #30 Hyundai throughout the race.

“We definitely tried, it felt like we were a battering ram for a little bit, we had a few hits,” Brown said.

“It was a good race, Jason drove awesome at the end and I just couldn’t catch him. We seemed to have good pace but we’ll try again tomorrow, still off the front row.”

“I tried a dive into the second last turn and then at the last turn I thought I left enough room on the inside but got pushed off. I’ll have to have a look at the footage because you never know until you look at the footage from the outside. It did a bit of damage to our right front which made it a bit tough.”

With a progressive grid, the podium finishers will occupy the first three spots for the start of tomorrow’s first of two races, beginning at 1:15pm local time with the final race kicking off at 2:20pm.