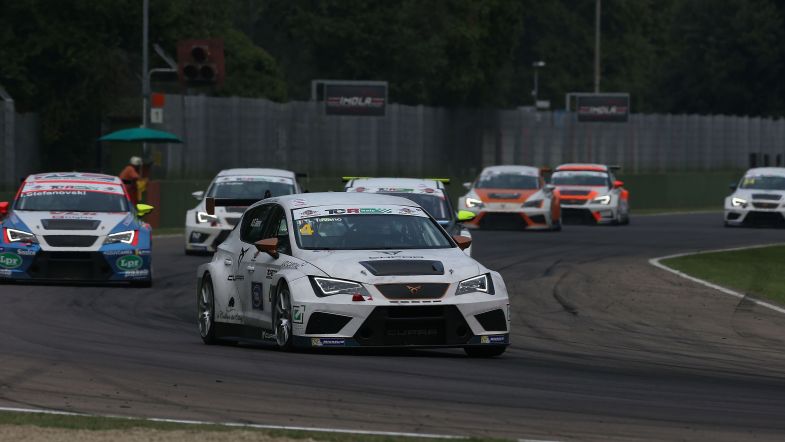 Salvatore Tavano won the final TCR Italy championship race of the weekend at Imola after a tough fight with pole-sitter Marco Pellegrini.

Target Competition driver Pellegrini started from pole but was immediately challenged by Scuderia del Girasole driver Tavano into the first corner with contact between the two.

Pellegrini was able to keep the lead through the first series of corners, only to be overtaken by Tavano at the Tosa corner, again with contact between the two.

But Hyundai driver Pellegrini had not given up and was able to get up alongside Tavano on the outside into the same corner a lap later. But Tavano had none of it and pushed Pellegrini off track, with the Hyundai driver dropping down the order to finish eighth. The incident is under investigation by the stewards.

The incident allowed Cupra driver Felix Wimmer to get past Tavano, but just for a short while as Tavano managed to get back past into the lead. This allowed Igor Stefanovski through into second place while Wimmer later retired from the race due to a technical issue.

Another controversial fight was the one for second place between Cupra driver Stefanovski and Audi driver Jacopo Guidetti.

Guidetti had the pace on Stefanovski but had trouble getting past. The BF Motorsports driver tried several times but it was not until the very last lap that he was able to get past. Guidetti made a late move into the Tosa corner and the two made contact, with Guidetti getting past to cross the finishing line in second place.

Alfa Romeo driver Massimiliano Mugelli was involved in the fight for second place earlier in the race but made a mistake in the final half of the race, running over a gravel trap, and had to settle for fourth position ahead of Cupra driver Eric Scalvini.

Yesterday’s winner Enrico Bettera finished sixth despite being pushed into a spin on the first lap by Matteo Greco, with Raffaele Lissignoli and Pellegrini rounding off the top eight.

Tavano heads the standings on 132 points, Pellegrini is second on 100 points and Matteo is third on 91 points.

The next TCR Italy championship round takes place at Vallelunga on September 13-15th.