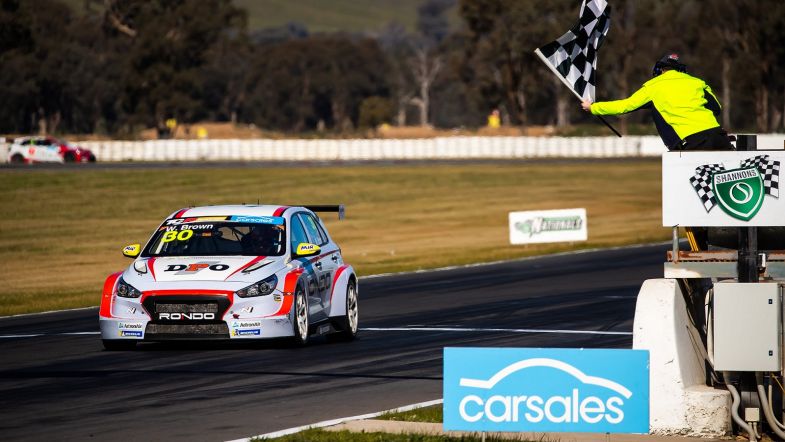 Will Brown has taken a commanding win in the penultimate race of the Winton round for the TCR Australia series, coming home with a comfortable margin to extend his championship points lead.

The HMO Customer Racing driver controlled the race from when he took the lead on the second lap, streaking away at the front without issue as one of his title rivals suffered an issue late in the race.

From the front row of the grid, an even start between polesitter Jason Bright and Will Brown meant the pair went into the Turn 1 and 2 chicane side by side. Bright was able to get the edge, leading into Turn 3 in his Matt Stone Racing prepared Volkswagen Golf GTI TCR while the HMO Customer Racing pair of Brown and Nathan Morcom slotted their Hyundai i30 N TCR machines into second and third.

A spin in the back of the pack for James Moffat continued a horror weekend for the Renault Megane RS TCR driver, filling the last three spots on the grid with his Garry Rogers Motorsport team-mates. Moffat ended up in the grass after locking wheels with the Kelly Racing Holden Astra TCR of Hamish Ribarits, dropping down to last.

Back up front, Brown continued to apply pressure on Bright, getting ever closer to the Golf GTI TCR and eventually pouncing on the second lap at Turn 3. Brown was able to extend his lead to over three seconds by the start of the fifth lap, checking out from Bright who was having a hard time keeping Morcom behind.

Morcom had his own battle towards the end of the race as Aaron Cameron applied the pressure to the Hyundai, putting his Melbourne Performance Centre Golf GTI TCR up to the rear bumper of Morcom’s car.

A spin on lap 12 for Chris Pither took the GRM Megane RS TCR out of the race after hitting the wall, the race staying under green flag conditions though Brown lost time to Bright after he dropped three seconds in the yellow flag zone, bringing the gap back to five seconds.

Dylan O’Keeffe pitted from a top five position on the road after his Alfa Romeo Giulietta TCR suffered a puncture, having to limp back to the pits for the Ashley Seward Motorsport crew to work on the car. Sitting second in the championship points, the tyre issue dropped O’Keeffe well down the order and down on points to Brown.

After holding off a challenge for the last podium spot all race, Morcom finally had to concede third place to Cameron on the second last lap after a clean move from the MPC Volkswagen driver. The battle between the pair let Bright streak away to second while Brown come home to take the win by eight seconds.

Russell Ingall fought up three places in the race from eighth on the grid to fifth at the flag in his MPC Audi RS 3 TCR, finishing a few seconds clear of Andre Heimgartner’s Kelly Racing Holden Astra TCR. It was Honda Civic Type R TCR’s in seventh and eight with the Wall Racing entries of Tony D’Alberto and John Martin fighting for the position right to the flag.

The day’s second and final race will start at 2:20pm local time with Brown looking to capitalise on his pole position start to extend his championship points lead.