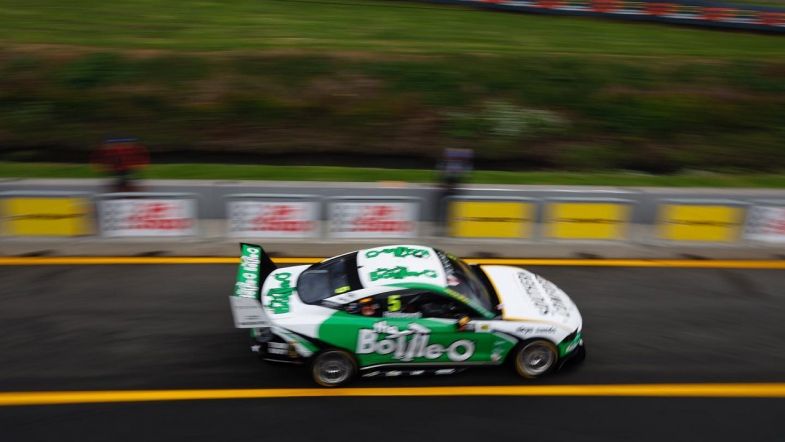 Tickford Racing’s Lee Holdsworth has gone quickest in practice for this weekend’s Pukekohe Supercars Championship round, setting a new lap record around the New Zealand circuit in the day’s final laps.

Holdsworth took full advantage of his Ford Mustang’s pace in the second hitout of the day, eclipsing the 2016 Supercars lap record by half a second and finishing nearly two-tenths clear of the field.

In a mixed wet/dry start to the day, Will Davison went to the top of the order at the start of the day, putting his 23Red Racing Ford Mustang to first on his final flying lap as the track surface dried up.

The day’s opening practice session was halted briefly to clean up debris after the Garry Rogers Motorsport car of Richie Stanaway went off at the final corner, collecting a styrofoam sign along the way while copping suspension damage after tagging the outside wall.

Practice two got underway under cloudy skies but on a dry track surface, encouraging the field to get on track early after losing valuable running in the day’s first outing.

Championship leader Scott McLaughlin was left to sit on the sidelines in the first ten minutes of the afternoon’s practice session, unable to start the DJR Team Penske Mustang thanks to a crank angle sensor failure. His first flying lap was good enough for fourth, just under two tenths down on Jamie Whincup who led the order halfway through the 30 minutes in the Triple Eight Holden Commodore.

Whincup led for a majority of the session and into the final minutes until a fast lap from Davison displaced him, breaking the Supercars lap record as his Tickford Racing team-mate in Lee Holdsworth went quicker still, posting a lap of 1:01.6281 with just over two minutes to run.

Shane van Gisbergen sandwiched his Triple Eight Commodore in between the two Tickford Mustangs on his last flying lap, slotting in to second as the chequered flag fell and the field completed their laps.

Holdsworth held the top spot ahead of van Gisbergen and Davison as David Reynolds jumped up to fourth in the Erebus Motorsport #9 car, followed by Nick Percat’s Brad Jones Racing entry. Whincup and McLaughlin ended the session in sixth and seventh while Anton de Pasqule made it two Erebus cars in the ten with Kiwi Fabian Coulthard behind him as Scott Pye rounded out the top ten for Walkinshaw Andretti United.

Qualifying for tomorrow’s 200km race will consist of a 20 minute session, beginning at 13:55 local time as the first race of the round starts at 16:10.