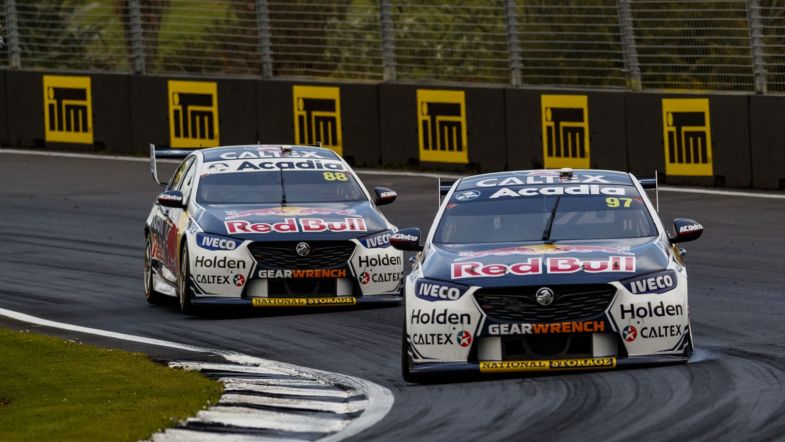 The finishing order of Race 23 of the Supercars Championship has been shuffled after post-race penalties were handed out to Triple Eight’s Jamie Whincup and 23Red Racing’s Will Davison after the 200km outing.

After finishing on the podium, both Whincup and Davison have been pushed further back down the top ten thanks to time penalties for two separate incidents during the race.

Whincup was put on notice after a clash with the Brad Jones Racing entry of Nick Percat in the opening laps, fumbling a pass up the inside of Scott Pye’s Walkinshaw Andretti United car and tagging the rear of Percat, sending him into a spin and onto the grass.

While Whincup finished second on the road after leading a large portion of the race and fighting up from twelfth on the grid, a 15 second time penalty demotes him to sixth place.

Tickford driver Davison finished third on the road but was quickly penalised 15 seconds as well for speeding in the pit lane, dropping down to ninth in the final order.

With the order finalised, Shane van Gisbergen retains the win for Triple Eight with Cam Waters salvaging second for Tickford Racing after hitting team-mate Chaz Mostert earlier in the race. David Reynolds jumps up to the final podium spot in the leading Erebus Motorsport car, holding off championship leader Scott McLaughlin’s DJR Team Penske #17 for what was fifth on the road.

Both drivers have the opportunity to make amends tomorrow with a second 200km race to close the round starting at 14.10 local time, preceded by qualifing at 09.20 and the top ten shootout at 11.40.