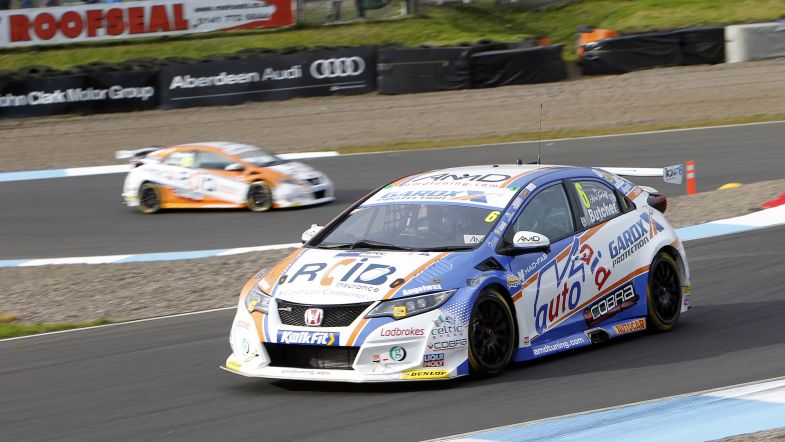 Rory Butcher heads the pack in opening practice at Knockhill

Home hero Rory Butcher topped the times in the opening practice session of the weekend as the British Touring Car Championship headed north of the border to Scotland for round eight of the season at Knockhill.

The Cobra Sport AmD man held top spot for much of the session at the wheel of his Honda Civic Type R, making the most of his local knowledge to end up a quarter of a second clear of the chasing pack – a relatively large margin at one of the shortest circuits on the calendar.

The man behind Butcher would be a surprise however, with Aiden Moffat ensuring a Scottish 1-2 at the wheel of the Laser Tools Racing Infiniti, with Moffat edging ahead of Stephen Jelley’s BMW in the closing minutes of the session.

Andrew Jordan – who briefly led the way at the mid-way point of the session – was fourth quickest in the first of the WSR BMWs and well ahead of title rival Colin Turkington, who would fail to make it into the top ten with his ballast laden 330i M Sport; the Northern Irishman ending up down in 13th despite being little more than half a second off the outright pace.

On his return to action, and with maximum ballast on his car as a result, Mike Bushell was an impressive fifth in the second of the Cobra Sport AmD Hondas, with the top six rounded out by Senna Proctor, who managed to outpace team-mate Ash Sutton. Sutton would end up in ninth, with the two BMR drivers split by the FK8 Hondas of Josh Cook and Dan Cammish.

For both BTC Racing and Team Dynamics, there were issues for the sister cars however, with Chris Smiley suffering a turbo problem that left him unable to set a competitive time and Matt Neal missing the early stages of the session as the team worked on his car in pitlane. Neal would however end up with the 14th best time.

Behind Sutton in ninth, the top ten was completed by Jake Hill’s Audi S3 with the top 23 drivers in the session covered by less than a second.