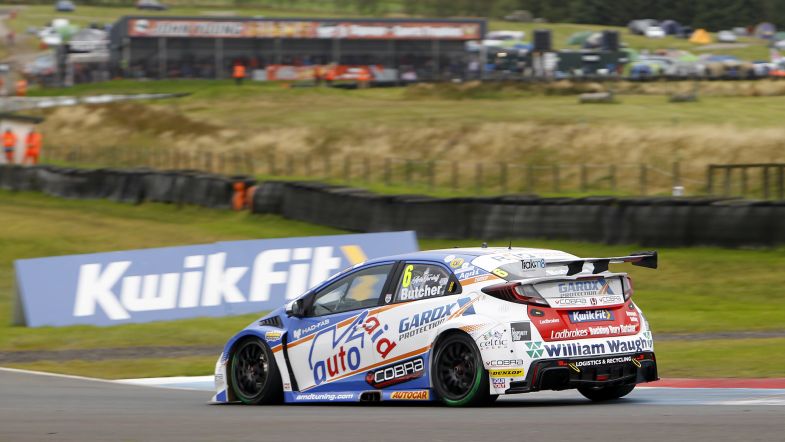 Rory Butcher remains out front as times plummet at Knockhill

Rory Butcher remained the man to beat at Knockhill as lap times plummeted during the second free practice session ahead of the eight meeting of the British Touring Car Championship season.

Having already lapped below the lap record in FP1, the Cobra Sport AmD driver lowered his best time still further with a best time of 50.615s being nine tenths of a second quicker than Jason Plato’s qualifying lap record – and nearly 1.5s up on Colin Turkington’s race record.

In fact, the top 20 drivers would beat Plato’s mark, with the leading 24 under the race lap record.

Butcher’s closest rival this time around would be the new FK8 Honda Civic of Dan Cammish, although the 2018 pole sitter was still well down on the local hero, with a gap of 0.254s being even larger than the gap between Butcher and Aiden Moffat in the earlier session.

Stephen Jelley was third best in his BMW 125i M Sport and quickest of the rear-wheel drive cars, with Jason Plato slotting into fourth spot in the first of the Vauxhall Astras. Moffat would impress again in the Infiniti Q50 to go fifth, ahead of Andrew Jordan’s Pirtek-backed BMW.

As was the case in the opening session, Jordan had the edge over title rival Colin Turkington, with the defending champion finding himself ten places further back on the timing sheets – thanks in no small part to the additional weight on his car.

After their issues in FP1, Matt Neal and Chris Smiley were both able to set top ten times in the session, with Tom Oliphant and Ash Sutton rounding out the top ten.

The session was brought to a slightly early end after Michael Crees went off into the gravel at the Chicane with less a a minute remaining on the clock.

Qualifying is scheduled for 15:00 local time.