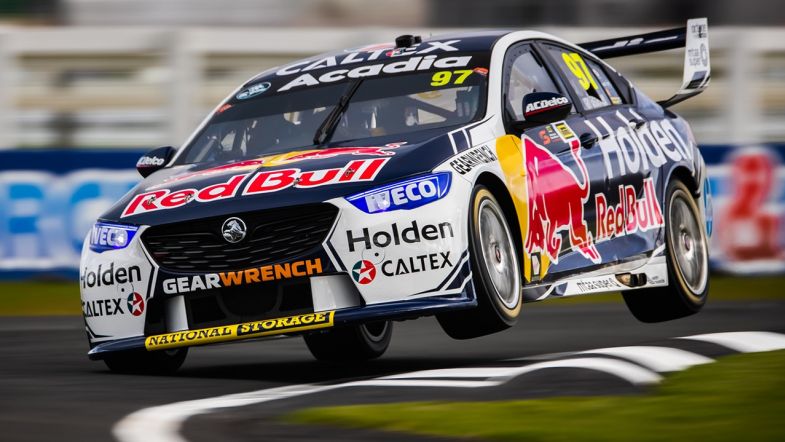 The New Zealand crowd at Pukekohe Park was treated to another one of their homegrown heroes winning at the Supercars Championship Auckland venue as Shane van Gisbergen capitalised on his pole position to take the win in Saturday’s race.

Starting from pole for the opening 200km race, the 2016 series champion asserted his dominance over the day in the Triple Eight Race Engineering Holden Commodore to win his third race of the season and jump to second in the driver’s championship.

A day of friendly fire between team-mates saw Triple Eight buck the trend with their drivers finishing one-two on the road though a post-race investigation for Jamie Whincup due to an earlier incident means a cloud hangs over his head this afternoon.

Van Gisbergen converted pole to the race lead off the line, leading Cam Waters in the Tickford Racing Mustang into the first corners as Waters’ team-mates in Will Davison and Chaz Mostert followed on the opening lap while the Triple Eight #97 car led the way.

Waters piled the pressure on van Gisbergen as the Commodore struggled on the second lap, bunching up the pack as Scott McLaughlin made an attempt at fifth place from his DJR Team Penske team-mate Fabian Coulthard at the hairpin, resulting in the championship leader dropping a spot to the Erebus Motorsport car of David Reynolds.

Reynolds promoted himself to fifth as the field started to find space, getting down the inside of Coulthard at the hairpin to set his sites on the Tickford entries in front. Coulthard came in for his first stop on lap 8, followed by Jamie Whincup who had qualified the Triple Eight car 12th, spinning Nick Percat in the opening laps which saw the Brad Jones Racing Commodore drop down the order.

Out in front, van Gisbergen started to extend his lead over Waters, setting a new fastest race lap record in the process after resetting the qualifying record before the race. On fresh tyres but in last place, Whincup went quicker still, showing the one-lap pace of the Triple Eight entries.

An early retirement for the Team 18 car of Mark Winterbottom brought out the first safety car of the race with Davison peeling straight into the pits as the rest of the field came in on the next lap. van Gisbergen led out of the lane as Davison popped up to second, Reynolds taking a shorter fill and going to effective third place with Waters, Mostert and McLaughlin behind.

As the race resumed, Coulthard led the pack ahead of Anton de Pasquale, Whincup, Andre Heimgartner then the train of the effective race leaders, headed up by van Gisbergen with James Courtney being the disrupter, putting the Walkinshaw Andretti United #22 into sixth.

Mostert started to make progress after making passes on team-mate Waters then Reynolds, slotting in behind Davison who held station in seventh on the road. Out front, Whincup got himself into clear air and stretched out a lead, being out of sequence after a short first stop but making his way back up the corrected order thanks to car speed.

Coming in for his stop with all brakes locked and steering on the lock stops, Whincup relinquished the lead on lap 38, having to sit for a long time in his pit bay to get the mandatory fuel drop into the #88 car, returning to the track in clear air.

Mostert and Reynolds followed the trend on the next lap, coming out well down on Whincup and on either side of van Gisbergen who was yet to stop. Waters and McLaughlin came into the pits on lap 40, rejoining the circuit behind Mostert who had to fight Waters on the out lap as Reynolds held station ahead of Reynolds.

Contact between the cars of Waters and Mostert at the chicane came about when Waters locked a brake on the inside, damaging Mostert’s steering and dropping the duo down the order, making a potentially strong day for Tickford a nightmare.

At the same time, van Gisbergen pitted and only just came out ahead of Whincup who took the fight to his team-mate, being told to hold station as the Triple Eight cars ran first and second on the corrected order.

As van Gisbergen stretched his lead out front, Whincup held second though still with a potential penalty over his head, running ahead of Davison on the road as Waters comfortably staying in fourth. The real battle existed for fifth on the road between Reynolds and McLaughlin with the championship leader wanting to move up one more spot.

With the order unchanged, van Gisbergen took his third win of the season ahead of Whincup and Davison on the podium. Waters came home fourth while Reynolds held on to fifth ahead of McLaughlin. Lee Holdsworth made it three Tickford cars in the top ten, finishing ahead of Coulthard in eighth while fellow Kiwis Andre Heimgartner and Richie Stanaway completed the ten in their Kelly Racing and Garry Rogers Motorsport cars.

As all of the New Zealanders finished in the top ten, the Kiwi crowd will be looking for more strong results tomorrow in the second 200km race of the round. Qualifying will kick off at 11:20 local time with a top ten shootout at 13:40, all leading up to the race at 12:10.