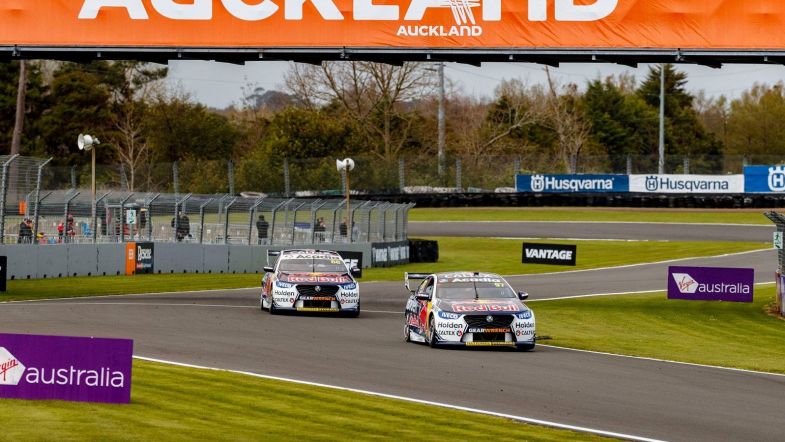 Shane van Gisbergen has taken a popular pole position at his home track of Pukekohe Park ahead of today’s 200km Supercars Championship race at the New Zealand venue.

The Triple Eight Race Engineering driver went quickest in a do-or-die final lap in qualifying, edging out his rivals and further lowering the bar for the Supercars qualifying lap record around the Auckland track.

A tight session saw one second split the first 22 of 24 cars in the field as the top ten were covered by just over half a second, making every moment count around the fast, flowing circuit.

Reverting to the traditional qualifying format of just one 20 minute session after the three-part formula had been used for most of the season, the teams and drivers rolled into qualifying on equal terms after 90 minutes of practice so far over the round.

Starting under cloudy skies, conditions were ideal for quick laps early on with Chaz Mostert leading the way on the first flying laps, putting the Tickford Racing-prepared Ford Mustang at the top of the order with a 1:02.0099, already below the 2016 qualifying lap record which was only eclipsed on Friday.

Times fell during the middle portion of the session with Kiwi local Shane van Gisbergen getting the Triple Eight Holden Commodore up to provisional pole ahead of his fellow New Zealanders in Fabian Coulthard and Scott McLaughlin, both in the DJR Team Penske Mustangs.

With all six Mustangs in the top seven, van Gisbergen stayed at the top of the timesheets from Coulthard, Will Davison, McLaughlin, Mostert, Cam Waters and Lee Holdsworth as the field rolled out for their final laps at the end of the 20 minute session.

Waters put the #6 Tickford car to provisional pole as the clock neared zero, going just quicker than Davison as van Gisbergen posted a nearly perfect last lap, taking pole and the new lap record with a time of 1:01.5480, just over a tenth clear of Waters.

Davison managed to hold on to third after performing well in the day’s earlier practice session, followed by team-mate Mostert who was fastest in the morning. Behind them will sit the DJR Team Penske duo of Coulthard and McLaughlin, edging out David Reynolds’ Erebus Motorsport car as Lee Holdsworth will start eighth.

The other Erebus car of Anton de Pasquale will start ninth with Nick Percat’s Brad Jones Racing entry in tenth.

The first race of the weekend starts at 12:10 local time.