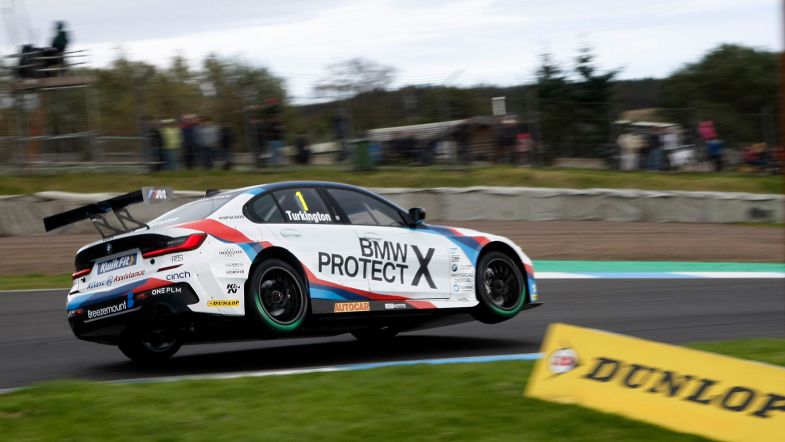 Colin Turkington retained his lead in the British Touring Car Championship standings despite a tough weekend at Knockhill that saw him lose 20 points to closest rival Andrew Jordan.

Turkington went into the weekend 30 clear of his fellow BMW driver and minimised his losses in the opening race of the weekend by taking fourth, as Jordan secured second behind Rory Butcher.

However, the battle between the pair took a huge swing in race two after Jordan took his sixth win of the campaign and Turkington failed to score; the defending champion losing out after a clash with Butcher at McIntyres saw him go off in the gravel.

Recovering to get back on track, Turkington managed to finish 19th and then came through to tenth in race three as Jordan this time found himself unable to score after going off avoiding Senna Proctor’s spinning Subaru.

It means Turkington now sits ten points clear of Jordan with six races left to run, and with Honda’s Dan Cammish just one point further back.

“My day was going to plan after race one but then suddenly I found myself reversing from the gravel and two races were compromised,” he said. “That is how things can change but it’s nice to have fought back to grab some points in race three and I still feel on the front foot leaving Knockhill. My gap is nowhere near as big as it was, but that isn’t a bad thing as it shifts the mentality for me and it’s attack from now on.

“Things could have been a lot different if I didn’t get the car out of the gravel in race two and a championship can swing on small things like that. There are critical moments in each season and I think that was one of them. The focus now is to avoid any more in the coming rounds and get back on track at Silverstone.”