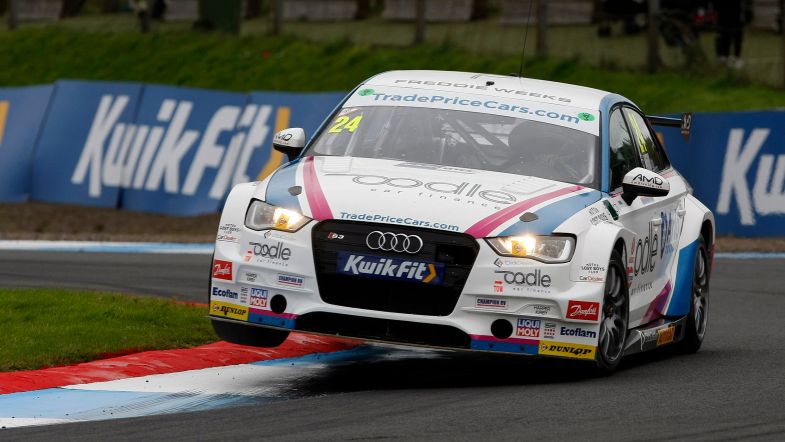 Having lost a potential victory at Oulton Park earlier in the season, Jake Hill secured his maiden win in the British Touring Car Championship with a lights-to-flag success in race three at Knockhill.

The Trade Price Cars Racing driver had started on pole thanks to the reverse grid draw and produced a fine drive to lead from the front despite two safety car periods that backed up the field behind.

The first of those came at the end of lap one after Andrew Jordan became beached in the gravel at the Chicane having been forced to take avoiding action when the Subaru of Senna Proctor suffered a spin ahead, preventing the WSR man from trying to build on his race two victory to overhaul Colin Turkington in the standings.

Hill would establish a slender lead at the front ahead of the Honda of Josh Cook before a second brief safety car to allow a wheel to be removed from the middle of the circuit after contact between Mike Bushell and Rob Collard.

Controlling the second restart, Hill was able to break away from Cook behind as he secured his maiden win – as well as the first for both team and car.

Cook was a solid second to cap a strong race day recovery with Adam Morgan taking third in his Mercedes having fought his way ahead of Jason Plato’s Vauxhall just before the second caution period.

Plato would then drop behind the second BTC Racing of a charging Chris Smiley, and would ultimately slip down to eighth having been hung out to dry on the outside at Clarks.

Behind Smiley, Tom Ingram took fifth his Toyota ahead of Dan Cammish and Tom Chilton, with the top ten completed by Aiden Moffat and Turkington.

For much of the race, Turkington had looked destination to finish towards the lower reaches of the points but with six laps to go, was finally able to get ahead of Ash Sutton’s Subaru having been stuck behind the Levorg in 14th early on.

Turkington then took advantage of others squabbling ahead to climb to eleventh and a late move on Rory Butcher then ensured a top ten finish and a ten point lead over Jordan at the end of the weekend.

Next up for the series is Silverstone on the weekend of 28/29 September.