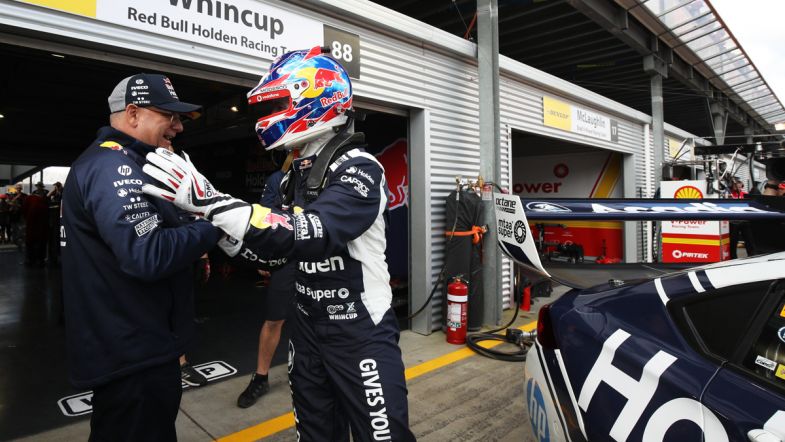 Jamie Whincup has taken his first pole in 2019 after going quickest in qualifying and the all-important top ten shootout ahead of this afternoon’s Supercars Championship Race 26.

The seven-time series champion broke a drought which stretched back to the New Zealand event last November to take his first pole position of this season, banking a near perfect lap in the #88 Triple Eight Holden Commodore to start from the best position on the grid.

On fresh tyres and the last to hit the circuit, Whincup displaced a potentially popular front-row lockout for Tickford Racing to take his 81st career pole in the Supercars Championship, wanting to convert it to victory after being stripped of a podium in yesterday’s race.

Only two notable incidents occurred in qualifying earlier in the morning; the first was a red flag caused by David Reynolds going off the road between Turn 2 and 3, burying the Erebus Motorsport #9 in the sand and bringing out the red flag. His fastest time was deleted and he was forced to start from 22nd.

The other big moment was a lucky escape for Scott McLaughlin who went off the road at nearly 200km/h around the final corner, spinning through the grass and returning to the track after completing a 360 degree spin. He was able to provisionally qualify fifth for the shootout.

Cam Waters improved massively on his provisional qualifying result, being the first on the road in the shootout and going faster than his time to get into the top ten driving the #6 Tickford Racing Ford Mustang. Waters stood at the top of the timesheets for a strong portion of the session as the rest of the field set after his time.

Mark Winterbottom and Nick Percat couldn’t displace the Mustang in their Team 18 and Brad Jones Racing Commodores, nor could the DJR Team Penske pair of Fabian Coulthard and championship leader Scott McLaughlin.

Tickford team-mate Holdsworth was the sixth car to hit the track and the first to go quicker than Waters, edging out the provisional pole sitter by just over a hundredth of a second. Saturday’s pole man Shane van Gisbergen couldn’t replicate his pace from yesterday, dropping to fifth provisionally behind the DJR Team Penske cars.

A relatively conservative lap from Chaz Mostert put him as the slowest of the Tickford cars, managing to only record a time better than Percat and Winterbottom while being a tenth and a half down on Holdsworth. Will Davison was only just slower than his pseudo team-mate in Mostert, struggling for speed on scrubbed tyres.

Last on the road after provisionally qualifying on pole, Whincup was able to put in the fastest second and third sectors to take pole by two-tenths of a second from Holdsworth, asserting his authority over the field and breaking a pole drought.

Whincup will line up alongside Holdsworth as they prepare for the race to begin at 14:10 local time. An all-Mustang second row of Waters and Coulthard will head up the Kiwis of McLaughlin and van Gisbergen on row three with Mostert and Davison making it an all-Tickford row four. Percat and Winterbottom round out the fifth row and the top ten starters.