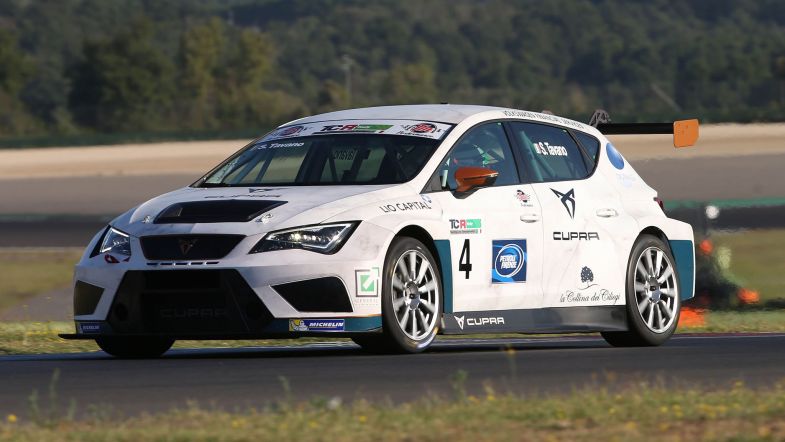 A last-minute problem prevented pole sitter Andrea Argenti from heading to the grid in his Opel Astra TCR, with Scuderia del Girasole’s Eric Scalvini inheriting pole position instead in his Cupra.

At the start Scalvini took the lead ahead of team-mate Tavano and Pit Lane Competizioni’s Enrico Bettera in his Audi RS 3 LMS.

The race was relaunched after four laps, with Bettera attacking Tavano. Further back, Team Wimmer Werk’s Christian Voithofer spun off the track and retired from the race.

As Bettera increased the pressure on Tavano, Scalvini opened the door for his team-mate and championship leader to take first place. The fight in the leading trio allowed the third Cupra TCR from Scuderia del Girasole, driven by Matteo Greco, to close the gap to those ahead, with Pellegrini also joining the leading pack.

Bettera attacked Scalvini on the outside with the pair making contact. Greco then tried to attack Bettera, but Pellegrini took advantage to overtake the third Cupra TCR, with Greco returning the favour half a lap later. The battle allowed BF Motorsport’s Jacopo Guidetti, driving an Audi RS 3 LMS, to reach the group.

The hostilities continued, with contact between Guidetti and Pellegrini resulting in the Target Competition driver spinning off the track, making contact with the barriers. The safety car was again called into action, but not before Guidetti also pushed Greco off the track. Both moves from the BF Motorsport driver were under investigation by the stewards.

The race finished behind the safety car, with Tavano taking his fourth victory of the season ahead of Scalvini and Bettera.

Team Wimmer Werk’s Gunter Benninger, also with a Cupra TCR, crossed the line in eighth place. Pellegrini and Voithofer completed the classification despite both having retired from the race.

Tavano said after the race: “I’m very grateful to my team Scuderia del Girasole. It has been a difficult weekend but I’m able to take home a good result. It has been an emotional year with ups and downs and I’m grateful for the team’s support.”

The next round of the TCR Italy will be the season finale at Monza on the 18-20th of October.