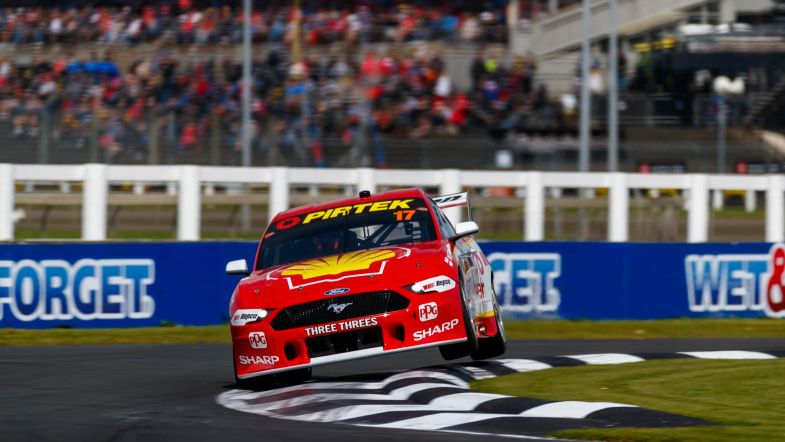 The record for most wins in a season has been beaten by Scott McLaughlin as the DJR Team Penske driver notched up his 17th win of the year in car #17 in today’s last Supercars Championship race at Pukekohe in New Zealand.

Extending his championship lead to 598 points, McLaughlin’s 17th win of the year came at his home race, beating the record set by Craig Lowndes in 1996 of 16 victories in a season and matched his combined win tally of 2017 and 2018.

Though McLaughlin won the race, his rival Shane van Gisbergen won the round and with it the Jason Richards Memorial Trophy, securing the honour in the #97 Triple Eight Holden Commodore for the second time.

A first and a second for van Gisbergen across the two races across the weekend ensured he won the trophy named after former Supercars driver and New Zealand native Jason Richards who unfortunately lost his battle with cancer in 2011.

While McLaughlin winning has been a common headline for the season, Race 24 could’ve had many other winners as a mistake by race control and pole sitter Jamie Whincup shuffled the order early in the race, resulting in the Triple Eight Race Engineering driver copping a second penalty in as many days.

Whincup bolted to an early lead after getting off the line strongly, opening up a gap to Lee Holdsworth behind him as his Tickford team-mate in Cam Waters lost a spot to Fabian Coulthard in the run to Turn 1, the DJR Team Penske Mustang beating the Tickford machine to gain third on the opening lap.

Saturday winner van Gisbergen had a fight on his hand on the opening lap with championship leader McLaughlin, the pair banging panels in the fast complex of corners to close the lap. While the #17 DJR Team Penske car got the position, van Gisbergen’s Triple Eight Commodore let a gap open up in the following laps.

Holdsworth and Coulthard took their first pit stops on lap six, pitting early for tyres and fuel as Waters came in to the pits on the next tour, jumping Coulthard on the road to slot in behind his team-mate. After stretching out a healthy lead and starting to get caught in traffic, Whincup came in to pit from the lead on lap 13 and returned to the track ahead of Holdsworth who narrowed the margin to the effective race leader.

An issue for David Reynolds on lap 14 saw the #9 Erebus Motorsport car stop on the run to the hairpin, forcing the safety car to be deployed. The pause in the race allowed everyone who hadn’t yet stopped to come in to the pits as Reynolds’ car retired and limped back to the garage.

With the safety car coming out, Whincup passed it while the lights were illuminated yellow, indicating to slow down and follow. While he passed and complained about being waved through, Holdsworth held station in second and was then dropped to eleventh in the order when Whincup was later picked up as the leader.

As racing resumed, Whincup was handed a pit lane penalty shortly after for the infringement under safety car conditions, relegating the lead to McLaughlin from van Gisbergen and Chaz Mostert in the highest placed Tickford Racing car.

With team principals and drivers blowing up about the shuffled order under the safety car, McLaughlin stretched out a margin in front, managing tyres over van Gisbergen after taking a larger amount of fuel in the first pit stops. The gap stayed stagnant at two seconds and a stop for Mostert on lap 36 left the leading pair out in front with plenty of space behind.

As Mostert started to set fast times, van Gisbergen’s came in for his final pit stop on lap 40, just coming out on track ahead of the Tickford car but having to defend hard on cold tyres. As they battled for effective second place, McLaughlin came in and rejoined the track well clear of the battling van Gisbergen and Mostert.

With the laps ticking down, McLaughlin held a two second lead over van Gisbergen as Mostert behind them had to fend off a late attack from Nick Percat, the Brad Jones Racing driver pitting much later in the race for tyres and trying to take advantage of the fresh rubber.

Despite a hard fight on the last lap, Percat couldn’t get past Mostert for third as McLaughlin took the chequered flag with a healthy margin over van Gisbergen. Being the tight top four, Todd Hazelwood recorded a top five for Matt Stone Racing, far away from the cars in front and behind.

Scott Pye finished sixth in the #22 Walkinshaw Andretti United Holden Commodore, just ahead of Simona De Silvestro who recorded her career best finish of seventh for Kelly Racing. Mark Winterbottom was penalised 15 seconds for speeding in the pit lane, dropping to eighth in the Team 18 car with the Garry Rogers Motorsport duo of Richie Stanaway and James Golding finishing ninth and tenth.

After the stuff up under safety car, Holdsworth ended up in 15th with Whincup a place behind in 16th. A handful of cars behind them were also caught up in the dramas earlier in the race, leaving race control to answer a few questions leaving New Zealand.

The next Supercars Championship race takes place on October 13th with the legendary Bathurst 1000.