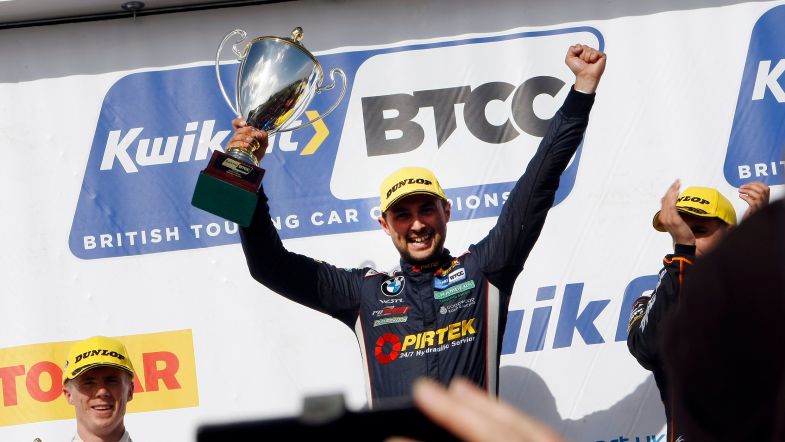 Andrew Jordan admits that it is time to “roll the sleeves up” after the battle to secure the BTCC title was blown wide open on a dramatic weekend of racing at Knockhill.

The Pirtek Racing-backed driver headed to Scotland sitting 30 points down on WSR team-mate Colin Turkington and outscored his rival with a solid second in race one behind Rory Butcher’s Honda – with Turkington taking fourth.

Race two however saw a huge swing in the points as Jordan stormed to his sixth victory of the campaign and Turkington failed to score following contact mid-way through, meaning the pair went into the final race of the weekend split by just four points.

This time around, a DNF for Jordan and tenth for Turkington ensured that the Northern Irishman was able to retain a lead of ten points, but having taken 20 points out of his rival over the weekend as a whole, Jordan admitted it was very much game on in the title race.

“Obviously it could have been better with what happened in race three but the first two races were great and have allowed me to bring the gap to Colin right down,” he said. “The car was really strong, as it has been from the moment we hit the track in practice – we haven’t really had to do a great deal to it. To now have six wins, which equals the most I have secured in a season, is fantastic.

“It’s all to fight for going forwards, and the aim for me is to just keep winning races and scoring points. I’m going to focus on myself because I can’t control what other people are doing, but I think we will be strong when we get to Silverstone and Brands Hatch for the final two rounds.

“I’ve been edging back up to Colin and it’s going to be incredibly tense. We’re well in the title fight and it’s time to roll the sleeves up.”