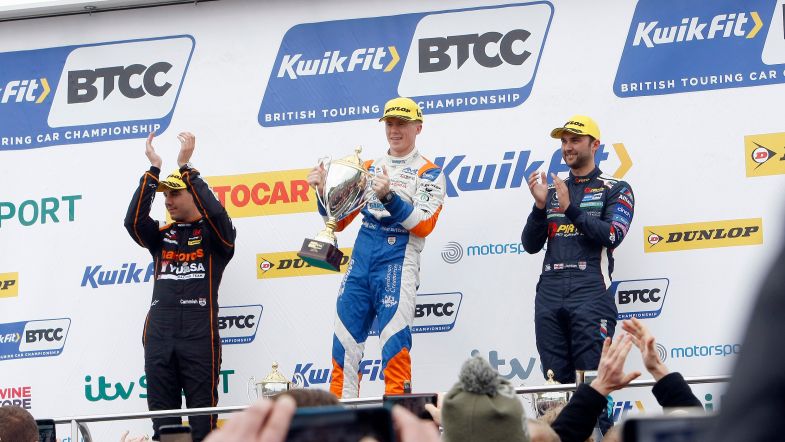 Rory Butcher said it was “amazing” to secure victory on home soil after the Scottish racer picked up his third win of the BTCC season at Knockhill.

At the circuit owned by his family, Butcher laid down a marker as soon as track action kicked off in practice, leading both sessions with a margin of a quarter of a second in his Cobra Sport AmD-run Honda Civic.

Butcher then stormed to his first pole position in qualifying, and headed into race one as the hot favourite to take victory.

That win duly followed despite the fact that Butcher was forced to contest most of the race without second gear, and he then followed it up with third in race two – albeit after a clash with Colin Turkington that led to him picking up a grid penalty for race three.

A 14th place finish there means Butcher remains in contention for the title with six races to go, and is just a point away from the Independents’ points lead.

“I think that has been our best weekend to date in terms of the results,” he said. “We laid down a real marker on Saturday to top all three sessions with a good gap, although Sunday was a bit more difficult.

“Andrew Jordan kept me honest throughout race one and it was a real challenge after I lost second gear. I had to really drive to the maximum around the lap to build a gap because I knew that taking the hairpin in third gear would leave me open to attack.

“To bring the car home in front of the Scottish fans was an amazing feeling as there was a lot of expectation on me this weekend, and a lot of people here supporting me.

“A podium in race two was a good way to reward the guys for their hard work changing the gearbox, and race three was one of those where I had to get what I could whilst racing in the pack.

“Overall it’s been a fantastic weekend and I’d like to dedicate the win to the Tordoff family. They’ve all been in our thoughts, and that one is for them.”