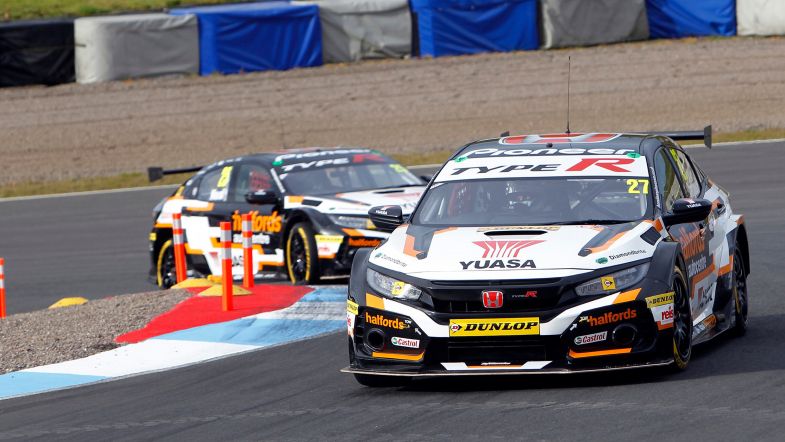 Dan Cammish says he is proud of the way in which his side of the Team Dynamics garage has grown over the course of the season after a dramatic weekend at Knockhill brought him right back into contention for the British Touring Car Championship title.

After a tough start to the campaign saw him head away from round two at Donington Park down in 14th in the championship, Cammish has steadily worked his way back up the order with a season based around consistency.

The 30-year-old headed to Knockhill having scored four podium finishes in six races since the summer break, taking him to nine for the season.

Two more in Scotland, as well as a solid sixth in race three, mean he now sits just eleven points behind Colin Turkington in the title race and one behind Andrew Jordan in what is shaping up to be a titantic fight for the title.

“I’m proud of the work Dynamics have put in and as a team, we have grown this season,” he said. “Over the winter I lost my engineer Eddie Hinckley when he decided to retire. Tom Hunt stepped into that role and we were a new, young side of the garage.

“We’ve just come together and since [round three at] Thruxton, we have been consistently quick and have scored good points. Okay so we haven’t had our name in lights as much as others and I don’t have six wins like Andy Jordan does, but I’m only one point behind him and that is because we have ground out results.

“Whilst the Civic Type R has been one of the quickest cars, it hasn’t been the quickest car. I wouldn’t have believed I could take as much out of Colin at Knockhill as we did, and it’s blown the title race wide open.

“Now we go to circuits that will favour us a bit more and I’ll be pushing hard.”

Cammish will be able to count on the support of team-mate Matt Neal across the final two rounds and he admitted that that could be key in the fight for the title.

“There is an inter-team battle going on at WSR,” he said. “Jordan is unsure about his future and what will happen to him, and they are both going to want to win. Colin wants that fourth title whilst Andrew wants his second – and I want to win my first.

“I have Matt alongside who is experienced at this and knows what needs to be done, and I have a team that knows how to win the title. I’m sure that they’ll be getting behind me to try and wrap up this championship.”